"Dead Man Walking" is an 80-page anthology that serves as a reintroduction to a classic Will Eisner character who never really saw publication until 1983, but whose creation led to a couple of the most celebrated stories in Esiner's famous 'The Spirit' series. The volume contains three all-new tales by Chaloner; the fully restored original John Law tales from the 1940s, by Eisner; and a short, but informative, essay about the character's publication history.

The original John Law tales, which make up the last 25 pages of the book, that are spectacular displays of when Will Eisner was at his finest. The art is fluid, with the action and motion in the panels virtually leaping off the page, and the stories are solid noir crime tales with quirky characters and femme fetales that could only have sprung from Eisner's mind and pen. They're great reading, and anyone who's admired Eisner's graphic novels or his Spirit work should read these tales, too. 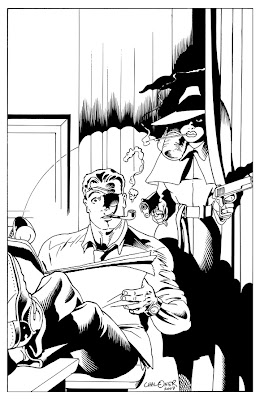 The bulk of the book consists of Chaloner's new John Law stories, which capture the flavor and tone of Eisner's Law stories, as well as the elements that made the Spirit stories so fantastic. Chaloner also captures Eisner's writing style with quite a bit of flair. He does these things, however, without aping Eisner, but instead retains a style of his own. In fact, Chaloner's tales are a little darker than Eisner's, and while they definately set in a film-noir world of the 1940s, they also have a modern vibe to them. ("Law, Luck, and the Dead-Eyed Mystic" is a perfect fusion of that film-noir flavor with modern story-telling--and Chaloner throws in some cool backstory elements for John Law, as well as a couple of superhero-type characters.)

The flaw with Chaloner's work is that he, like so many modern artists, doesn't quite have the talent for layouts and pacing of a comic book story that older artists had. No matter how packed with activity that Eisner's pages were, the eyes of the reader always moved easily across the panels and pages; Chaloner's work is less clear and his layouts less easy to follow. In the bigger picture, he doesn't end each page with a "mini-cliffhanger" the way Eisner and other classic comic book artists did... and I think that Chaloner's tales suffer because of these factors.

Despite my complaints relating to Chaloner's mastery of the basics of comic book art above, I think "Dead Man Walking" is a comic book that everyone who loves comics should read. Chaloner's weaknesses as an artist are all too common these days, and his strengths more than make up for them. And vintage Eisner is always worth the price of admission.

(This graphic novel was follewed by a single issue of what was supposed to be a "John Law" ongoing series. That was 2005. I've not seen a second issue. I can only assume this means John Law's second chance for an extended publishing life was only slightly more successful than his first.)