Is that the smallest continent on Earth?

When an experimental missile goes out of control and crashes on an uncharted island, Air Force Major Joe Nolan (Romero) leads an expedition to recover the guidance system and figure out what went wrong. But when the same mysterious rays that caused the missile to go of course also brings down the expedition's plane, Nolan and his team must travel through miles of wilderness, scale a mountain... and find themselves confronted with dinosaurs and other life that has died out millions of years ago elsewhere on the planet. But what is more deadly--the pre-historic creatures, or the man Nolan suspects of being an enemy agent (Hoyt) and of trying to pick off expedition members one by one. 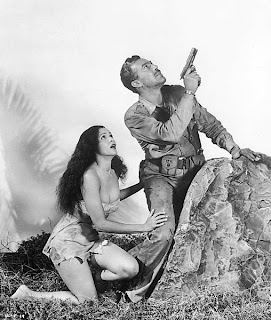 "Lost Continent" is a film with very little to recommend it. It's got a slow-moving story that's made even more slow-moving by what seems like a never-ending sequence of the characters climbing a mountain; I used to think the driving scenes that are popular padding in crappy movies were boring, but scenes of guys pretending to be scaling a mountain on an obvious set are even worse.

Those climbing scenes are doubly-boring when the attempts at generating suspense come from extreme illogic in character behavior and actions. For example, one character is injured early in the expedition, but do the supposedly experienced leader Major Nolan leave him behind in the care of the buxom and friendly young native lass played by a cameo-ing Acquanetta near the end of her brief acting career? Nope, they drag him along on a difficult climb for no reason whatsoever other than to have his injury give rise to him slipping and falling... and ultimately to give grounds to suspect the Russian defector as a double-agent trying to sabotage the mission. It's what "The Eiger Sanction" (review here) might have been like if it had been made by morons.

Then there's the stop-motion animation that gives life to the dinosaurs that menace our heroes. Even allowing for the facts that this is a movie from 1951 and that it was more stock footage like the exterior scenes of the air force base the missile was launched from. However, after taking a quick look at the silent movie version of "The Lose World," where I assumed the dinosaurs had been picked up from, I concluded that the animation was original... just so bad that it made one think it had to state from the early decades of filmmaking. Further, these dinosaurs don't appear until about 3/4th of the way into the film, despite the fact they were a main selling point of the picture.

At every turn, this is a movie that lets the viewer down. Heck, even the promo still I used to illustrate this article has nothing to do with anything that happens in the movie. Acquanetta is never menaced by any flying creatures, as she never sets foot outside the village set.

The Rating of Three I'm giving this film is so low that it borders on a Two. I'm only being as generous as I am, because the actors are actually pretty decent given what they're working with. Plus, Cesar Romero is particularly good as the American officer who knows to be suspicious of a possible enemy agent, but who is intelligent enough not to jump to judgement until he is 100 percent certain that he is right. I always appreciate a movie that features portrayals of military officers as I have known them, not the frothing-at-the-mouth paranoid psychopaths that are so often presented in Hollywood flicks. (Of course, another reason for the portrayal of Major Nolan may be a statement on the part of the filmmakers about the Red Scare that was running through American pop culture and politics at the time this movie was made. While there were reasons to be wary, there were more reasons to be certain before accusing, could be what the movie was trying to say.)

Those few good elements can't make up for the fact that this is a movie that at every turn delivers less than it should. Heck, even the name promises more than the movie delivers. Instead of a lost continent, it presents a mountain valley on an uncharted island.