Honest banker Paul Lavond (Barrymore) is sentenced to life in the hellish prison of Devil's Island after his business associates frame him for a robbery and murder they committed. However, after 17 years, he escapes with a mad scientist who was working on a method to reduce humans to a height of mere inches (all for the good of humanity, of course). The scientist may have been mad, but his methods worked--they not only reduced humans to doll-sizes, but they make them controllable via mental telepathy. Consumed with hatred for those who framed him, and a wish to restore the wealth that was denied him to his now-grown daughter (O'Sullivan), he takes the scientist's methods to Paris and embarks on a bizarre campaign of terror and vengeance. 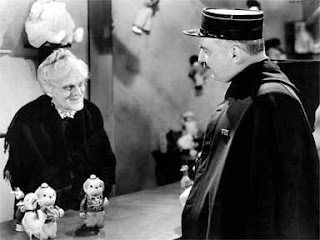 "The Devil-Doll" is a film with an exceedingly goofy concept at its core, but the cast is so spectacular and the effects so well done--they hold up in most instances even today--that it really doesn't matter. Barrymore and every other actor in the film give such straight performances that telepathically controlled, tiny assassins seem perfectly reasonable. (The one exception is Ottiano, who plays the widower of the inventor of the "dollification" process... and since she's even nuttier than her husband, it's okay for her to be waaaay over the top.)

This is a film that's well-shot, well-acted, and that holds up well nearly 75 years years after its release.