'Daughters of the Dragon' is disappointing

As a kid, I loved "Iron Fist" and I found the references to adventures had by supporting characters Misty Knight and Colleen Wing to be particularly intriguing. The bionic cop and the girl samurai had a detective agency called Nightwing Restorations, and they had adventures in a magazine that I only ever saw in the footnotes that Marvel littered across the pages of their comics.

Recently, I rediscovered both "Iron Fist" and Nightwing Restorations when Marvel released the massive anthology "Essential Iron Fist." And, to my delight, I discovered a somewhat slimmer reprint volume--a collection of those referenced adventures of the "Daughters of the Dragon" in Hong Kong! 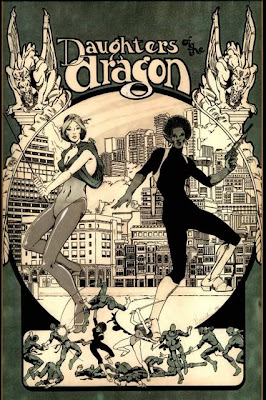 Well, I waited almost 30 years to be underwhelmed. The art by a still-developing Marshall Rogers is not bad, but it's not all that good either, and the Claremont stories are dull and uninteresting. Worse, they're something of a retread from the storyline in Iron Fist where Colleen is brainwashed. When he did it with the Colleen Wing character the first time, it was part of an excellent storyline that transformed both her and the character of Danny Rand in positive ways story-wise, but the similar abuse heaped on the character in "Daughters of the Dragon" is just bad and pointless.

(What was it with Claremont and mentally raping strong female characters? He ruined Ms. Marvel, Psylocke, and probably several others over the years by doing this.)

I wanted to like these tales, because I think both Misty and Colleen are incredibly cool characters... but these tales just aren't all that good. They're better than the modern appearances of the characters (in a 2006 mini-series last I was aware), but still disappointing.
Posted by Steve Miller at 12:04 AM