Too much bloat weakens 'A Cause for Alarm!'

A delusional, bed-ridden man (Sullivan) writes a letter to the district attorney's office in which he claims his wife (Young) and doctor (Cowling) are plotting to kill him. As he reveals this to his wife, his weak heart gives out. She has just given the letter to the mailman, and she launches into a frantic series of attempts to recover it, before she ends up being framed by a dead man for a murder she didn't commit. 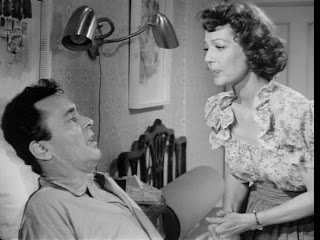 "Cause for Alarm!" could be an exciting--and even thrilling--little movie, but it is about 15 minutes too long. It drags a bit in the beginning and it sags in the middle. It needed to be more concentrated in order to fully capture the dread of the main character and to drive home the sense of ever-closer doom that is closing in on her as more and more people seem to grow suspicious of her, and she fails in her attempts to retrieve the letter.

The acting in the film is good all around (even if Young's constant hysterics get a bit tiring) and the technical aspects of the film are very well-done, particularly the lighting of the film's climactic scenes. The only problem with the film is its bloated, drawn-out script.