The much-hated, psychopathic Baron Gregor de Bergmann (Karloff) summons his respected, kindhearted twin brother Anton (also Karloff) back to their ancenstral lands following Anton's ten-year absence. Gregor announces that he intends to step down and elevate Anton to the position of Baron, thus restoring faith in the noble family... and hopefully avoiding a prophecy that stated Anton would someday murder Gregor. However, the evil twin has ulterior motives, including designs on the innocent noble-woman Thea (Marsh). 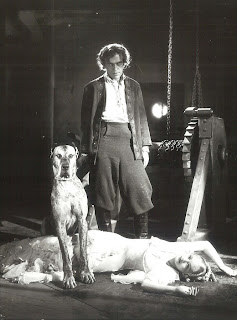 A period melodrama that has some fairly shocking twists and turns for a film made in 1935, "The Black Room" is a stylish, well-acted and well-filmed movie with impressive sets and costumes. Karloff in particular shines in the dual role of twin brothers--one good and one evil--and his performance is particularly impressive when one takes to impersonating the other, and he switches back and forth between the two characters.

If you enjoy the Roger Corman-produced/directed Poe adapations from the 1960s, you'll love "The Black Room." Although rarely mentioned, it's definately one of the best films Boris Karloff appeared in, and it features one of his best performances, so it's a Must See for Karloff fans.