'X the Unknown' is the dirtiest radioactive monster of all!

A routine military exercise on the Scottish moors brings draws forth a mysterious, formless mud-creature from the depths of the Earth. Research scientist Adam Royston (Jagger) and an assortment of law enforcement and military personnel work to discover the nature of the creature and figure out how to stop it, even as it gains strength and claims evermore victims. 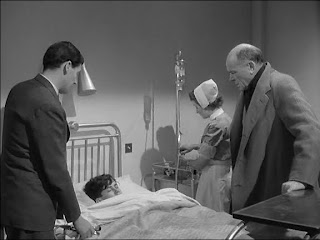 "X: The Unknown" is a rarely seen and underrated monster movie from Hammer Films. Like so many horror/sci-fi films from the 1950, it features a radioactivity-driven creature that seems destined to destroy the world. The creature here is particularly well-conceived, particularly in light of the fact it's perfect for the limited effects budget and technology that the filmmakers were working with.

This is a well-crafted movie, where everyone both in front of the camera and behind it are doing their very best work. The script is suspenseful and perfectly paced, the creature is well-conceived and perfect for a film of limited budget, and the various model and special effects shots are better looking than in films with five times the budget. The actors give top-of-the-line, perfectly believable performances Heck, even James Bernard, whose music I often find overblown and inappropriately loud at all the wrong times, provided a score that works perfectly throughout the movie.