Top talent, bargain-basement comedy and thrills in 'The Black Cat'

When one of greedy relatives on an unpleasant--but exceedingly wealthy--old woman decides to help her into the grave through murder, it's up to a family friend and greasy real estate broker (Crawford) to unmaks the killer. But he better hurry, because it's a dark and stormy night, and the killer has more lives to claim.... 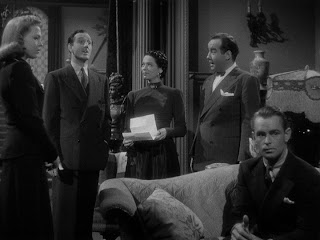 Universal sure does love to throw random films into their DVD collections. In the marketed-as-a-horror-films "Boris Karloff Collection" there was the light mystery "The Night Key" and the historical drama "Tower of London," while the "Universal Horror: Classic Archive" features "The Black Cat." Sure, the film includes horror film regulars like Basil Rathbone, Anne Gwynn and Bela Lugosi, but it is actually a comedy that spoofs the Dark Old House genre that flourished in the early 1930s.

"The Black Cat" was the second film that the famous Poe short story "suggested" to Universal Pictures. It has more in common with the source material than the 1934 picture the story "suggested"--this one at least features a black cat that ends up unmasking a killer with its yowling--but it's nowhere near as good.

As comedies go, it's below average. The behavior of the comic characters--a real estate agent played by Broderick Crawford and a dishonested and scatterbrained dealer of antiques played by Hugh Herbert--is rarely all that funny, although the comparisons I've seen made to Abbott and Costello are unfair. Crawford's more-often-than-not straight man is far more respectable than most characters portrayed by Abbott, and Herbert's "Costello imitation" is more a reflection of the fact that both men started their carrers as comedians on the Vaudeville stage. It's not that Crawford and Herbert are ripping anyone off that viewers should be upset with, it's that they have such poor material and badly written lines to work with.

The overall thrust of the story is decent enough, although it is full of logic holes. I have the senese that someone, somewhere said, "Screw it... it's a comedy being made to just fill the release schedule; who cares the story doen't hang together?"

So, as is always the case when producers don't bother to get the foundation fo their film solid, we end up with an end product that is little more than a waste of talent and time. We have a comedy that's only mildly funny, featuring a mystery that's badly put together because the writers didn't put enough tought into it, and a film that squanders great talent like Rathbone, Gwynn and Lugosi.

In fact, no one is wasted more in this picture than Lugosi. He is relegated to a small and pointless role as the Italian groundskeeper, a role so small and pointless that he doesn't get to show his talent for dramatic or comedic acting. In fact, the role is so pointless that I think not even Lugosi took it seriously--or if he did, he added an attempt to do an Italian accent on top of his Hungarian one late in the shooting schedule because his accent is inconsistent between scenes. It has been written that Universal executives either did not respect Lugosi or didn't know what to do with him... and it's films like this that prove the truth of that. I still have to see one or two of Lugosi's Universal films, but this one has got to be close to the low point of his appearances in them.

That said, Gale Sondergaard does play one of the creepiest house keepers to ever grace the silver screen. Also, the scenes leading up to the end after the murderer has been revealed are very suspenseful and well paced. One can also add that the film is fast-paced, so no matter how dumb it gets at times, it never gets boring.