A sideshow performer (Krauss) and an eternal sleeper with prophetic powers (Veidt) engulf a small town in a wave of nightmarish terror and death.

Anyone who's taken a film history class has almost certainly seen "The Cabinet of Dr. Caligari". If you haven't seen it, and if you consider yourself a fan of horror movies, or a movie buff in general, you absolutely must see this movie. It is one of the most chilling horror movies ever made. 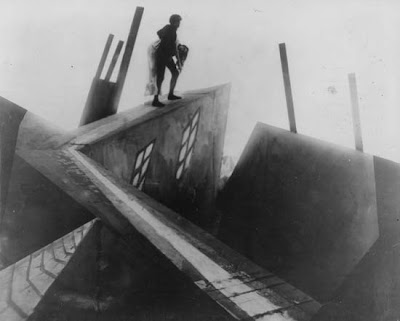 It might be a bit slow in the wind-up from the point of view of the modern audience, and you might be a bit amused by the Dr. Suess-like set design of the village in which the movie takes place... but you'll soon be rivited by the stark moods this film invokes through the sharp use of contrasts, the spooky appearance of the actors, and the brilliantly concieved sets. Dr. Suess will be very far from your mind, unless you want to view the film as "Horton Has a Psychotic Break and Hallucinates."

Although dating from 1919, this film still stands nearly unmatched it its ability to draw the audience into a disturbing, twisted world where ultimately nothing can be taken for granted or assumed to be true. And, depending on how you choose to interpert the very effective twist ending, it may well be a world from which there is no escape.

Every filmmaker has certainly seen this movie. It's too bad so few of them seem to have taken away any lessons from it.