'All Teed Up' brings chaos to the golf course

A socially inept banker (Chase) decides to take up golf. A chance encounter, and romantic chemistry, with a young woman (Todd) gets him invited to play on the course of an exclusive private club. 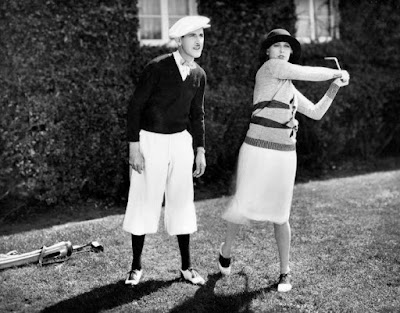 "All Teed Up" is a social comedy that uses golf as its source of humor. When it was made, the sport of golf had transformed from something played by an elite few to a national craze, and everyone from the struggling middle class on up were picking up clubs and knocking balls around. Charley Chase's character seems to be conceived to be a caricature of an average white collar worker hoping to be part of the new Big Thing even if he knows nothing about it. The three men he plays against, and tries to befriend in his inept and highly annoying way, are also caricatures of typical golfers, and they grow so frustrated that this clueless newbie is beating them that they start cheating. Despite the chaos he ends up causing, Chase's character is so guileless that viewers can't help but always be on his side as the film unfolds. Although some of the sequences during the golf game go on for a little too long and become repetitive, they never get boring because Chase's character is so likable. Heck, he's so likeable that you'll find yourself saying "good job" as he finally snaps and throws a temper tantrum (and yes... he does swear to a degree that might give the film a PG rating!)

One of the things that made this film very interesting was the scenes featuring Thelma Todd at the beginning and the end. Although Todd doesn't do much other than react to Chase being goofy, it's a clear demonstration of how well the two played off each other. Her appearance in this film is also a clear example of how she could light up the screen by just being present.

"All Teed Up" is one of several films where Chase and Todd are teamed up. Producer Hal Roach was so pleased with Todd's performance that by 1931 he had given her a comedy series of her own where she was one-half of a female Laurel & Hardy or Wheeler & Woosley team, first with veteran comedienne Zasu Pitts and later Patsy Kelly as her co-stars. Most of Todd's appearances with Chase are included among the 17 films in the Charley Chase at Hal Roach: The Talkies, Volume One set. I'll be reviewing more of these shorts as The Year of the Hot Toddy continues!