This early fantasy film is hokey but still fun

Dorothy Gale (Daniels) discovers a scarecrow (Leonard) near her home is alive and aware. She unties him from the frame he's on, and he saves her, her dog Toto, and a pair of farm animals from a sudden cyclone that sweeps everyone off the strange and magical land of Oz. Here, they make new friends and enemies, including the evil witch Momba (Greenwood). 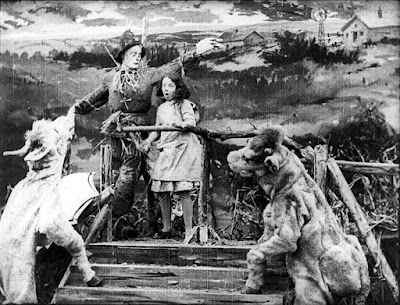 "The Wonderful Wizard of Oz" is reported to be one of four different film adaptations that were released in 1910, and it is the only one that survives to this day. The version I watched is a bit blurry and is missing both opening and closing credits/title cards, but it is in much better shape that films of more recent vintage I've sat through. It's either been restored, or film-lovers had the extra-ordinarily good luck of a copy having been kept somewhere under the exact right conditions for preservation.

Seeing that this film is almost 110 years old as I write this review, it's tricky for me to pass judgement on. For example, to my eyes, the film feels like a community theatre performance--a well-staged and elaborate community theatre performance but still at the level of community theatre--and that feeling is enhanced by the fact that the film consists entirely of static long shots with each scene framed as if it was unfolding on a stage... as well as the costumes worn by the actors playing the Cowardly Lion and the farm animals that are following Dorothy. Most of the special effects in the film are also mostly of the kind that would work well during a live stage performance, and I found myself chuckling more than I suspect the director would have liked during the scene where the cyclone spirits Dorothy, the Scarecrow, and the random farm animals following her around to Oz.

Still, this is a very entertaining film, even if I wonder about some of the choices that its writer/director made back then. At 13 minutes, this is more of an outline (or a highlight reel) of a Wizard of Oz movie than anything else, and while most of the iconic characters are here, some might have been best omitted since, to viewers with no prior knowledge of the Wizard of Oz novels, they seem to serve no purpose other than being weird for the sake of being weird. For example, Glinda the Good Witch shows up (levitating with a hilariously bad bit of wire-work), turns Toto into a giant dog that puts the Cowardly Lion in his place. Since neither Toto nor the Cowardly Lion do anything noteworthy outside this scene, and the Good Witch is never explained nor appears again in the film, the smart thing to do would have been to just omit those characters and have spent more time on the scenes in and around the castle of  Momba the Evil Witch. (What we do see is some of the neatest and funniest bits in the film; I wish there had been more of it.)

Another curious thing about the film is that it includes brief three song-and-dance production numbers... you know, the sort of thing you see in musicals. In a silent movie. They're fun to watch, but their presence still baffles me.

In the final analysis, this film is a bit of weirdness that I can think of three reasons you might want to check it out. First, if you're interested in early silent movies, you'll enjoy the artistry that went into making the sets, the costumes, and the special effects. Secondly, if you're a fan of the Wizard of Oz--especially the well-known 1939 film starring Judy Garland, you should see this movie, because it obviously served as a major inspiration for the costume designers 25+ years later. (The Scarecrow, the Cowardly Lion, and especially the Tin Man, all strongly resemble their counterparts in the more famous effort.) It's also fun, because of the differences that exist between it and the 1939 film... I especially liked the flying lizardmen that this film has. Finally, any lover of classic cinema needs to watch it, because it's the first starring role for Bebe Daniels, an actress who is little known today but who was a veritable superstar in the 1920s. She starred in this film at the age of 9, and it's a testimony to her talent that she first transitioned from child actor to adult roles, and then successfully made the leap to sound films in the late 1920s. Given that her overcame the obstacle that kill film careers to this very day--moving from child to adult actor in films--and her star continued to ascend through the 1930s (at which point she transitioned again to a career in radio plays), it's a shame that the passage of time has obscured her reputation. (I will make a point of seeking out more of her films to review in this space.)

Meanwhile, you can watch "The Wonderful Wizard of Oz" right here, on this blog, via this embedded YouTube video.