'Fifty Miles from Broadway' takes you to a different time

A showgirl (Woods) decides to retire from the stage and marry her childhood sweetheart in the small town they both grew up in. Upon returning, the young lovers find their fathers are still engaged in a feud that's lasted for 20 years. 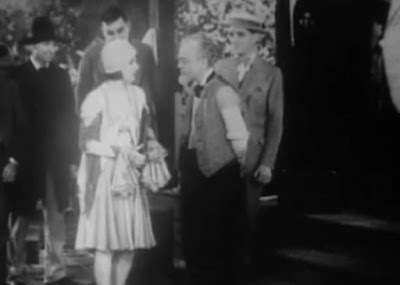 "Fifty Miles from Broadway" is a mini-musical that crams three songs, three production numbers, and several vaudeville-style back-and-forth comedy bits into less than 20 minutes. The film is so stagy in its presentation--from the acting styles to the way actors enter and exit scenes to pretty much anything else you can think of--that it's not even a full step removed from a straight recording of an actual stage performance.

Usually, I am bothered by excessive staginess in films, but in "Fifty Miles to Broadway" it's a clear stylistic choice rather than actors who don't now how to perform in a media different from theatre and/or silent film. The only weak point in the film is, sadly, at the very beginning the star-crossed overs sing a duet about how they're returning home... and Reginald Merville turns out to be a pretty bad singer. Story-wise. there's also the unfortunate fact that Harry Watson's character is lusting after his son's fiance and isn't subtle about it. All the other characters--including the object of his lust, who agrees to his request to put on one of her skimpy Broadway outfits and perform for him. The 1920s must have been a very different time indeed.

Of course, there's the drawback that this is yet another film transferred from a worn videotape or a decaying print. It's not the worst I've seen, but there literally ins't a moment in the film that isn't blurry (as the still frame used to illustrate this review demonstrates).

If you enjoy musicals, vaudeville and early talkies, I think you'll find "Fifty Miles to Broadway" entertaining, one weak number and an old pervert aside. (By the way, if you do watch it, and you know who played the father with the long beard--the girl's father--let me know. I can't find a full cast list for this picture it's so obscure.)