'Flirting in the Park' is a weak start

Two office ladies (Brewster and Tevis) spend a Saturday afternoon trying to one-up each other while on dates in the park. 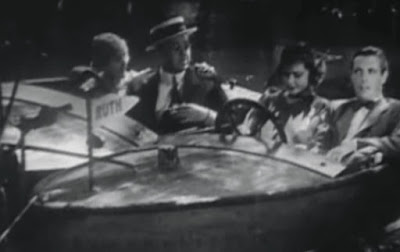 "Flirting in the Park" was the first in a string of short films starring June Brewster, Carol Tevis, and Grady Sutton, all of which have been collected on a two-volume DVD series titled "Blondes and Redheads." When I first started watching and reviewing these films, I wondered why the Alpha Video releases didn't present them in order, but instead led off with films from the later period of the series.
Now that I've watched "Flirting in the Park", I understand why.

While "Flirting in the Park" starts out with some nice workplace comedy, not to mention a look into office life nearly a century ago, the viewing experience quickly sours. It's great to dislike the villainous manager who sexually harasses June (played by June Brewster) and then forces her to work Saturday afternoon when the rest of the staff gets to leave early, but it's not great when the characters we're supposed to like turn out to be petty, mean, and shallower than parts of the lake they go boating on. If this had been the first film in the series I'd seen, I don't know if I'd bothered with any others, until the day where my pile of unwatched DVDs was almsot empty. (A day that will likely never come because I have YEARS of backlog to go through.)

Much can be forgiven for characters who are funny, and that's the biggest problem here: There's very little that's funny in this film, even in the office where the film was at its most amusing. The only character here who has any charm to it is the one portrayed by Carol Tevis. She's socially awkward, but wants to be a guy magnet like her friend June... or at least be SEEN as such by June (even after June steals back the date that Carol stole from her early in the film). Carol also has the only really funny bit during the later part of the movie, a gag revolving around her showing June how good she is at flirting. (I don't want to give anymore details, because I don't want to ruin the only truly good part of this film.)

It's a shame that this otherwise good cast is stuck playing such unpleasant, unlikable characters. This goes double for June Brewster, and, despite my distaste for the character she was playing, I found myself thinking it was a shame she was more more successful in her career. (After struggling along in mostly  minor and supporting roles from between 1932 and 1938, she gave up on acting and married a vice cop turned gaming mogul... who went onto become a founding figure of modern day Las Vegas. The parts she played in this film series may well be the biggest she ever had.)