A homicide detective (Gargan) having an affair with a thrill-seeking married wealthy woman (Carter) witnesses a murder during one of their trysts. Even though he can identify and arrest the killer (Wilcox), he can't do so without causing a scandal, destroying his family and ruining his career. Will a good cop who made a bad call do the right thing, or go further down the path of corruption? 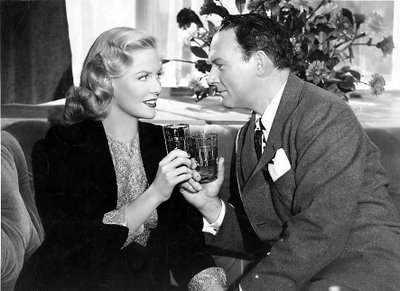 This is the stuff good 1940s film noirs and crime dramas are made of, and this is pretty good crime drama. Part proto-police procedural, part film noir, part melodrama, this film is fun! It gets really exciting when classism enters the picture, and the psycho dame the cop is fooling around with decides to choose between "her kind" and doing the right thing when the cop's conscience really starts bothering him. It's a nice twist that comes at just the right moment to kick the film's suspense level up even higher.

While the high quality of the film--with its perfect pacing, appropriately moody lighting, superior cinematography, and a cast that gives excellent performances all around--is to be expected from a major studio like Columbia, the film offers the surprise of what is perhaps the most sociopathic/borderline psychopathic femme fatale I recall seeing in a Hollywood movie made before the 1960s. From her demand to see the body of the murder victim to the icepick action late in the film, I was surprised by just how nasty she was. She makes the crazy scheming women of "Strange Woman" and "Lady From Shanghai" look like they should be selling Girl Scout cookies. While Janis Carter made a career out of playing characters like this, this is the most twisted character I've ever seen her play, and I wonder if this extreme character could be a reason the film sank from view after its initial release.

The only serious complaint I have with "Night Editor" is that they filmmakers, aside from the cars being driven, didn't make even a halfhearted attempt to match the look of the characters to the late 1920s time-frame the bulk of it takes place in. Would it really have been that hard for a major operation like Columbia to adjust the hairstyles of the women and get proper wardrobe for the entire cast instead of having everyone in contemporary mid-1940s styles?

A smaller complaint is that the film's resolution is ultimately predictable (doubly-so if you pay close attention to the exchanges that take place in the newsroom as the story unfolds). However, getting there is so much fun that it doesn't really matter.

Fans of film noir pictures, classic mysteries, and the type of crime dramas where the hero has to work backwards to prove the guilt of a murderer he has already identified will find plenty of entertainment here. This is one of the many movies that could do with a little more recognition from us film-fans.


Trivia: "Night Editor" was a popular radio anthology series where the editor of title would relate the "unreported facts" of some news item. It later became a television series.
Posted by Steve Miller at 1:30 PM