Another macabre trip for Betty Boop

Professor Bimbo and his crystal ball reveal Betty's past as a baby, and her grim future on a ghost-haunted desert island. 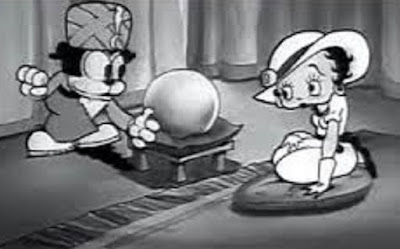 Much is made of Betty Boop's sexiness, but, to my eyes, these cartoons are more about being spooky than sexy. Sure, she ran around in a tiny dress that sometimes got pulled off her... but she was always being menaced by ghosts, demons, hillbilly rapists, and more! I'm far from an expert, but my sampling of Betty Boop cartoons from the 1930s seem more creepy than sexy to me, with only two not featuring some sort of supernatural element. Some even have the feel and pacing and logic of bad dreams and nightmares. (Okay, they have the feel and pacing and logic of MY bad dreams... so maybe that says more about my psychological state than it does about the cartoons....)

"Is My Palm Read" is another Betty Boop adventure that sees her (and recurring supporting characters Bimbo and Koko) menaced by ghosts. While Betty's captivity within a haunted hut on a desert island is initially just a psychic vision, the ghosts manage to somehow break out of Bimbo's crystal ball toward the end of the cartoon. In doing so, they somehow transform the reality of the cartoon from an urban setting to the desert island from the vision. How or why is impossible to discern, and the characters just seem to take it in stride--they do, after all, live in one of the most surreal worlds ever committed to film. However, while this sudden merging of psychic vision and reality leads to an amusing chase scene, it makes no sense in any context.

While I feel a bit foolish for expecting a Betty Boop cartoon to make sense, this move was just a little too dream-like, too surreal, and too chaotic for me; it made me go "waitaminnit" and got me thinking about the mechanics of the story instead of just enjoying it. I don't think that was the intention the director and animators, so I think it's a flaw in the execution here.

That said, it's really the only flaw. It's a flaw that takes away from the overall enjoyment of the cartoon, but not from the excellent and lush animation it features, nor from the catchy tunes  it delivers.

How about you take a few minutes out of your day to watch "Is My Palm Read?" and tell me whether I'm right or wrong in my take on it. You can check it out below, courtesy of YouTube.

Trivia: There are at least four different edits of this Betty Boop cartoon available for viewing online, on YouTube, Amazon Prime, and elsewhere. The version I have embedded here is, as far as I can tell, the most complete and closest to what was originally released into theaters in February of 1933. Most versions available to not feature the sequence with Betty as a baby, and at least one has a slightly different musical score. (The opening titles song does not have lyrics, for example.)
Posted by Steve Miller at 3:05 AM