'On the Loose' is worth catching

A chance encounter with a rich Englishman (Loder) gives a pair of young women (Pitts and Todd) hope that they'll finally have dates that doesn't take place at the Coney Island amusement park. They hope in vain, because, to a pair of wealthy Brits, there's nothing as exciting and exotic as a trip to an American amusement park. 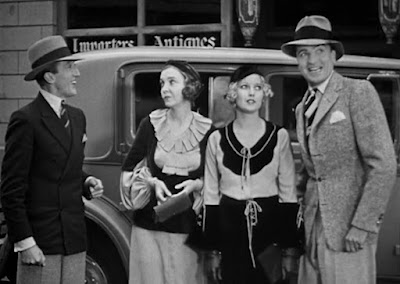 "On the Loose" is what more of these Thelma Todd-starring short films should have been like--more situational comedy and less slapstick. More of them should also have quiet scenes like the one featured here where we just have the lead characters chatting with one another. Little moments like that makes the characters more appealing. If more films had followed the pattern of this one--presenting a complete story with a beginning , a middle, and end, and focused on characters and situational human instead of lamely executed slapstick routines and incompletely written scripts--this could have been a great series of films instead of a mediocre one with flashes of greatness every now and then. (Patsy Kelly, who replaced ZaSu Pitts after the first batch of films, might have seemed less obnoxious if she'd had material to work with.)

As for the cast, Hal Roach (doing double-duty as both studio boss and director on this one) gets excellent performances out of everyone. Thelma Todd in particular shines in this picture, giving a nuanced performance that adds a tremendous amount of fun to every scene she's in. ZaSu Pitts delivers one of her typical, competent and amusing performances; she's also doesn't have to do any awkwardly staged, badly executed physical bits.

Meanwhile, British actors John Loder and Claude Allister provide some great moments as the gentlemen who sincerely believe they are showing their dates the greatest and most unusual time they have ever experienced. (Allister repeatedly ending up between couple Otto Fries and Dorothy Layton is a very funny running gag, and it's literal punchline is one of the film's high points.)

One thing I found fascinating about this film is the amusement park setting. I remember some of the things portrayed as being present in "fun houses" when I was a kid, as well as the shooting galleries. With some of the others, I was amazed that such rides/activities could even exist in the 1930s they appeared to be so prone to getting participants injured. I haven't been to an amusement park or traveling carnival in 25-30 years, so I found myself wondering if any of those sorts of games and activities even exist anymore. Maybe I need to get out more!