A pair of vaudevillians and their singing monkey (Pitts and Todd) get a last minute gig as a replacement act in a touring show. Things start to go wrong even before they set foot on stage, as they end up at odds with the show's ego-maniacal star (Garvin). 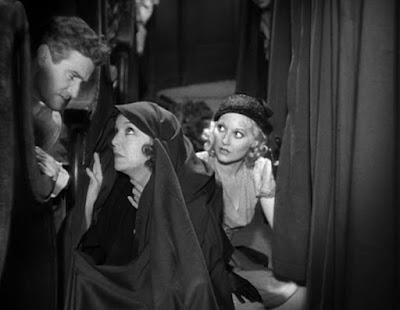 At the center of "Show Business" is a professional lifestyle that was coming to an end by the 1930s--that of a member of a traveling variety show that criss-crossed the nation on any number of theatrical circuits. Muscians, chorus girls, actors, and comedians... all would travel together from engagement to engagement, essentially spending their lives on the road (or, more specifically, on the train tracks). Headliners would often be fixed, but smaller acts would drop in and drop out, which is where our heroines enter the picture

After a weak beginning that should have just been used to set up the monkey and the excuse for later showing viewers Thelma Todd walking around in a hat and her underwear, but which is crippled by Pitts doing some unfunny prop comedy involving a telephone and a half-eaten apple, followed by a just-as-unfunny bit involving a dresser drawer, the film really takes off. From the moment the action changes to the train station, and we're introduced to the film's antagonists, Anita Garvin and her manager Monte Collins, through to the final fade-out, we are treated to hilarious chaos and some fine comedic acting.

In "Show Business", Thelma Todd gets to show off what made her such a fantastic screen actress (and I'm taking about the skimpy outfit she's almost not wearing in the pseudo-catfight at the train station). There are multiple in this picture where her face says everything that's going through the character's mind, and just watching Todd's facial expressions change (as she goes from confused to angry, or self-righteously indignant to embarrassed) provide some of the film's funniest moments. 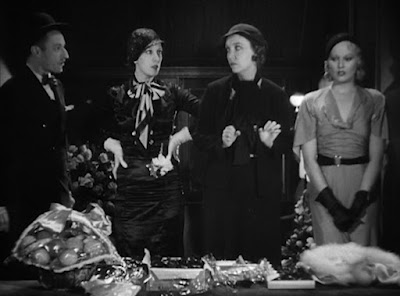 Anita Garvin also shines in this picture, playing a variant of the shrewish wife she'd portray in several Laurel & Hardy pictures, but here the main target of her ire is her manager played by Monte Collins while Todd and Pitts and their mon inadvertently make both their lives very difficult. It's a common in these kinds of shorts to see self-important characters be humiliated by the bumbling clowns with whom the audience's sympathies rests, and Garvin is so good at playing an obnoxious, self-entitled primadonna that her unraveling is extra satisfying. Meanwhile, Collins occupies an interesting place in the configuration of characters, swinging from threat to our heroines to an almost ally, as he tries to get them settled in the train so he can be spared any more abuse from Garvin.

The only disappointing member of the main cast here is ZaSu Pitts, but I don't think it's her fault. For the most part, she was stuck doing unfunny prop comedy, and her fidgety character seemed out of place surrounded by all the loud, overly theatrical types that occupy the rest of the film. That said, she had a couple shining moments in the part of the film at the train station, as she is trying to convince a police officer (Otto Fries) why it's a bad idea for him to make Thelma take off her coat; and later after she and Thelma wake everybody up on a sleeping car while trying to get into their bunk themselves.

Despite its weak opening, and a couple minor hiccups along the way (there is a point where some time must pass between scenes, but there's no indication of it, so the film feels a bit disorganized for few moments) "Show Business" is a fun entry in the Todd/Pitts series of comedies that benefits both for a strong script and the fact that most of its cast is in parts that let them play to their strengths as performers. (Although it's a shame that we never get to hear the monkey sing.

"Show Business" is one of 17 shorts contained in a two DVD set that features all of the films Thelma Todd and ZaSu Pitts made together.