'No Hands on the Clock' is flawed but still fun

A missing person case in Reno turns into a tangle of mistaken identities and murder involving a dysfunctional family and bank robbers... and it's disrupting the honeymoon of a private detective (Morris) and his bride (Parker), not to mention threatening to end their marriage before it even gets off the ground. 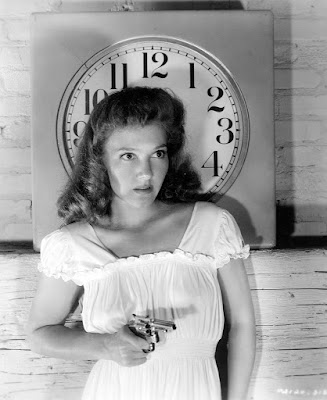 "No Hands on the Clock" is a light-hearted murder mystery that is dragged down by a mystery plot so complicated that it's difficult to follow. It's not neccesarily a bad plot--and I think it was probably perfectly fine in the novel this film was based on--but this film has too short a running time to give enough room for the motives for kidnapping and murder of the many characters to be given enough context and explanation.

But, honestly, the plot is almost secondary to the antics of the quirky detective, Humphrey. played by Chester Morris, and his wife Louise, played by Jean Parker. They're fun to watch as they exchange one-liners and witty remarks, although I couldn't help but think this marriage is going to end in a quicky Reno divorce with the level of disrespect Humphrey has for his wife, and the rampaging jealousy Louise has regarding he husband talking to other women, even when he's obviously doing so while "on the job."

The film is also fun to watch, because Morris and Parker are supported by actors and actresses who are cast as perfectly as they are in their various roles. Dick Purcell shines almost as brightly as Morris and Parker in a small but crucial role as a notorious gangster. The only sour note is a strange performance given by Astrid Allwyn, in what would be her final film appearance of note. She has a fake smile frozen on her face and she is never looking at the actors with whom she shares a scene but always slightly away from them, staring into space with a gaze as fixed as her smile. I don't know if she was reading cue cards just off set or what was going on there, but she gave a performance more fit for radio than the screen, and she stole her scenes in a bad and distracting way whenever she appeared. (I could understand what she was doing if her character was supposed to be blind that wasn't the case.)

In the end, there is just enough bad in "No Hands on the Clock" to outweigh the good. It's flawe, but still fun, and comes in on the low end of average.