A serial killer is terrorizing a German city and the citizens have formed a vigilante squad to catch him. After being cajoled to join them, Kleinmann (Allen) soon finds himself wandering the dark and foggy streets alone, dodging the killer (Kirby) and being drawn into the lives of other lonely people wandering the night. 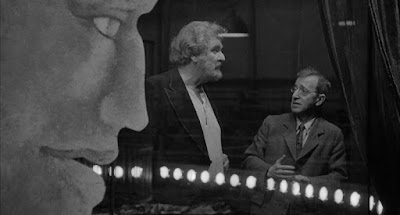 I have a weird relationship with Woody Allen movies. The films most people praise, I find irritating and barely watchable. Meanwhile, his flops and failures, I find immensely entertaining.

Like "Shadows and Fog." It's a film that many viewers find confusing and unsatisfying, and by all accounts it was a total bomb at the box office. Myself, I enjoyed it, because I like the movies that Allen was spoofing/giving homage to--the moody, German silent movies from the earliest decades of the 20th century, such as "The Cabinet of Dr. Caligari."

Allen and his cinematographer use the black-and-white medium beautifully, using the shadows and fog of the title to their absolute greatest potential. The characters and the world they inhabit also perfectly capture the mood and feeling of a silent-era thriller/horror movie--expect, of course, for Allen's character who wanders through the landscape lost and confused (when he isn't working against his nature and trying to be a heroic gentleman to Mia Farrow's displaced circus performer character. Despite two seemingly strong elements to form a uniting center of the film's plot--Allen's character and the killer on the loose--that center does not exist. Like many of the silent pictures that "Shadows and Fog" draws its inspiration from, the film feels more like a collection of vignettes than a coherent whole. 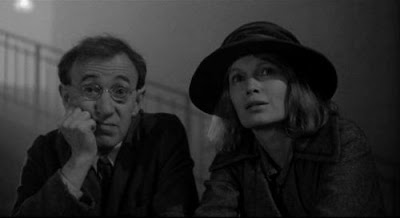 If the viewer recognizes and appreciates the source material Allen is drawing upon, "Shadows and Fog" is a lot of fun... but I can understand the frustration of those who "aren't in on the joke," so to speak. Those viewers will probably be even more frustrated by the fact that Allen really doesn't bring anything new to the table in that humor or character department that even audiences in 1991 hadn't seen in other films from him. Without seeing the constant wink-and-nods relating to silent movie style and story-telling, this film quite possibly comes across as a meandering, uninspired mess that adds insult to injury with its abrupt ending that leaves almost every single story line unresolved.

I agree with viewers who might find the ending to "Shadows and Fog" weak and unsatisfying. It makes perfect sense within the framework of the film, but I would have liked it to be a bit a punchier than it is. Such a stylish movie that features great performances from every cast member (even Madonna and Woody Allen who I sometimes feel is the worst part of his movies!) should have delivered something that reminded viewers of all those good things rather than making them feel let down.