'Scream of the Butterfly': Sexploitation
with interesting twists

Gorgeous and over-sexed Marla (Lobato) strings along her rich husband (Turner) while taking up with a hot boy-toy, David (Navarro), whom she meets on the beach. Soon, she is plotting to kill her husband so she can have the cash and the sex without the unnecessary complications. But her lover is two-timing as well... two-timing with someone far deadlier than Marla's milksop husband. Someone with whom he shares a dark secret. 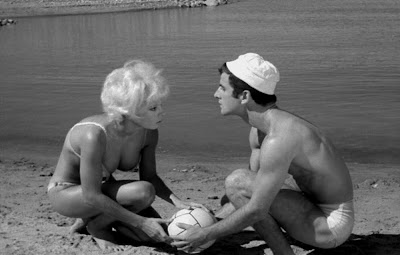 When this film first appeared in 1965, I imagine that parts of it must have been quite a shock to the viewing audiences. The film's sexuality was a bit more pronounced than the norm at the time, and the hot guy that Marla takes up with is actually young, hot and hardbodied in contrast to the usual dumpy, middle-aged guys that adulterous women always seemed to take up with in film s like these. But the part that was really shocking, I'm sure, is the dark secret that her lover kept, and the nature of the lover that he was betraying with Marla.

Marla's boyfriend is bi-sexual and his main relationship is a homosexual one, with a domineering and psychopathic queen (played with chilling effectiveness by Alan J. Smith, who co-wrote the screenplay with Howard Veit). By revealing that, this is one of those rare occasions where I provide "spoilers", but it's such an unusual element for a film of that day that it is perhaps the main reason to see it. (Although I haven't given away all the film's secrets... there's another twist hiding between the opening and closing credits that I haven't spoiled.)

Another reason to see it is as an illustration of just how much attitudes have changed in the film industry in the decades that have passed. Despite the film's frankness about Marla's sex life, the creators get all skittish and circumspect when it comes to discussing homosexuality, something which makes the scenes of lawyers discussing what would be a fair and just punishment for him, now that he is a murderer. They never mention that David is homosexual and/or bi-sexual, even though they talk about wanting to spare him from having dirty laundry aired in pubic. These days, films will go into homosexuality and heterosexuality with equal abandon, but not so 45 years ago.

Quickly paced--even if a bit herky-jerky due to the fact the action is split between the "present-day" scenes of attorneys having a conference about a murder case, and the sexy flashback action of Marla frolicking about in very little clothing--the film is made even more entertaining by some consistently creative camerawork and direction that drive the story almost by themselves.

And, yes, it also helps immensely that Nelida Lobato is an actress with two huge talents that always seem like they're about to pop out of the outfits she's almost not wearing.