Noteworthy only for featuring the first
on-screen eye-ball eating and zombie-rape?

Don (Woods), a mad doctor's assistant, kills his boss (Carpenter) in self-defense. Then, using his great skills as an impersonator, he pretends to be the doctor to cover up the crime long enough to dispose of the body. Things get worse and weirder from there. 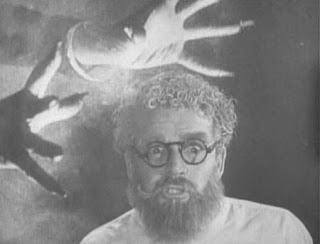 "Maniac" is a loosely based on (well, I should probably say "ripped off from") Edgar Allen Poe's "The Black Cat".

The filmmakers also pretend that they are giving us an intelligent tale of a man's descent into madness, like Poe's story "The Black Cat". As the film starts, our mad doctor's assistant is unwilling to even steal bodies for his boss's experiments in reanimating the dead, but by the film's end, he's plotting and executing all sorts of violence and depravity while laughing and carrying on in ways that made the dearly departed mad doctor Meirschultz look well adjusted.

I say it "pretends", because their true goal was to simply shock the audience as much as possible--and in 1934, this film would have been pretty damn shocking. The cat eyeball-poppling and eating scene is startling and appalling even when viewed with the very jaded eye of a modern movie viewer who's sat through hundreds of films along the lines of this one. 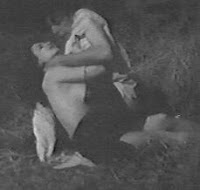 With copious nudity, a maniac raping a zombie girl, dancers walking around in their undies, perverted morgue attendants, cat-fur harvesting, and the aforementioned eyeball-eating scene, the film is clearly designed first and foremost to cram as much "objectionable" material into its 50-minute running time. I imagine this film showed in "adult" movie houses Back in the Day, and I can't help but wonder what the initial reaction might have been to it.

This can't be described as a good movie by any standards. It's even too dull to be suitable for a Bad Movie Nite--although there are admittedly plenty of moments of unintended hilarity from the overacting by just about every cast member and the horribly purple dialogue they deliver. However, if you want to see how even early filmmakers pushed far beyond the boundaries of good taste, "Maniac" is worth checking out. (I suspect it has some sort of place in cinematic history--"first eyeball-eating scene on film", or "first zombie-rape on film"?--so maybe all who consider themselves true cinema-buffs should check it out.