'The Devil Bat' flies again... for the first time!

I rarely pass along press releases on this blog, unless I'm plugging one of MY projects, but Peter H. Brothers' "Devil Bat Diary" sounds like so much fun, I want to help get the word out quickly... and I am presently up to my eyeballs in things that need to be done ASAP, so I don't have time to write something nice of my own. 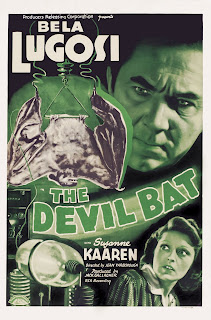 I am going to assume sight-unseen that Brothers' book is a lot of fun. Not only does it springboard off of one of the better movies from PRC that featured one of Bela Lugosi's best performances, but the film's kinda-sorta sequel, "The Devil Bat's Daughter" was so disconnected from the facts as they appeared in the original movie that the space for telling the "true story" of the events in "The Devil Bat" as told by one of the characters in the film.

Without further ado, here's what the publicists have to say about the book. (And if you pick it up, please drop by and let me know what you thought of it; it can be purchased via the Amazon links at the bottom of this post in hard-copy or Kindle ebook formats.)

Inspired by the famous 1940 film, “Devil Bat Diary” (ISBN: 9-781461-070924), tells the “true” story of what “really” happened to the unhappy citizens of Heathville, Illinois, during that terrible prewar summer, as recorded in the long-suppressed journals of Chicago City Register’s principal newspaper correspondent, Jonathan “Johnny” Layton.

The Devil Bats were furry fiends created by a scientific genius who believes himself wrongfully relegated to concocting perfumes and colognes which he despises for wages not worth mentioning. So, as a means to an embittered end, he manufactures an evil ointment with a scent that so infuriates his giant bats to such an extent they feel compelled to tear the throats out of their unsuspecting victims.

“Devil Bat Diary” tells for the first time the full inside story of what took place in ways not possible to show to Production Code audiences back then: such as Chief Wilkins being in love with Layton, or that Mary was a religious lunatic, or that Maxine the French Maid does not was “zee Devil Bat” to be killed and that Layton and his partner “One-Shot” McGuire couldn’t stand the sight of each other!

Written to coincide with the 70th Anniversary of the film’s release and dedicated to the eternal memory of Bela Lugosi, “Devil Bat Diary” is an unforgettably entertaining venture into a world filled with chirping Chiropterans, malicious murders, sacred sex and revolting revelations.

(Peter H. Brothers is also the author of “Mushroom Clouds and Mushroom Men – The Fantastic Cinema of Ishiro Honda.”)