A violent young man (Presley) is sent to prison for manslaughter. Therem his cellmate (Shaughnessy) teaches him to play the guitar and sets him on a path that, with the help of a beautiful music promoter (Tyler) will put him on a path to fame and fortune. But will the corruption of the entertainment industry--with its collection of crooks more sinister than any prison ever held--and the soul-blinding light of stardom save him or ruin him? 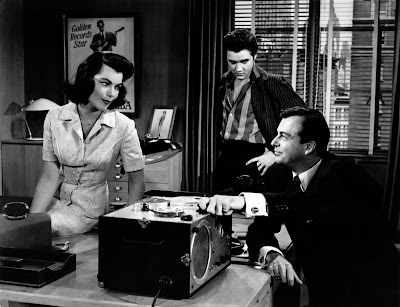 "Jailhouse Rock" is a neat little rags-to-riches-to-ruin-to-redemption story that remains surprisingly fresh and entertaining to this day. Although the plot offers few surprises and the characters are about as stock as they can be, the acting performances are solid and the film moves along at a fast clip, with well-staged scenes and great editing. Presley fans can enjoy the further treat of some excellent performances by "The King", with the title song, perhaps being the single greatest Elvis recording ever, being enhanced by a great presentation.

While the plot offers no surprises, Elvis Presley does. If you've tried to sit through some of Elvis' pictures from the 1960s, you will find yourself wondering what happened to the talent he displays here. Presley shows a range in this film that I've never seen in other of his cinematic vehicles, managing to even make some eye-rollingly corny moments in the film bearable and even infuses some of the more dramatic scenes with real power.

Even if you're not much of a fan of Elvis Presley, this is film worth checking out. It's an interesting look at what might have been, if he had put more energy into developing his skills as an actor, and if he and his management had taken more care in choosing the film projects he got involved with.