During the 1970s, Marvel was jumping on whatever pop culture trend or figure they felt was suitable for comic book adaptation. This period brought us the martial arts-craze inspired series like "Iron Fist" and "Master of Kung Fu,"; classic horror monster-inspired titles of "Monster of Frankenstein," "Tales of the Zombie," "Tomb of Dracula," "Werewolf by Night," and others; occultism-inspired titles like "Son of Satan"; genre-bending titles like "Ghost Rider", "Man-Thing", and "Spider-Woman" ; and the original "blacksploitation" comic book "Luke Cage, Hero for Hire."

Luke Cage wasn't Marvel's first "blacksploitation" hero--that honor goes to The Falcon, a pimp turned costumed Captain America sidekick--but he was the first to carry his own title. And what a title it was.

Conceived by Roy Thomas and initially written masterfully by the great Archie Goodwin, Luke Cage was serving time in Seagate Maximum Security Prison when he volunteered for a medical experiment that, thanks to the interference of a virulent and violently racist prison guard, went wrong and granted him increased strength and near-invulnerabilty. Escaping from prison in the chaos following the experiment gone wrong, Cage settled in Harlem where he decided to use his new-found powers to become a "hero for hire" out of a small office above a 42nd Street grindhouse theater. 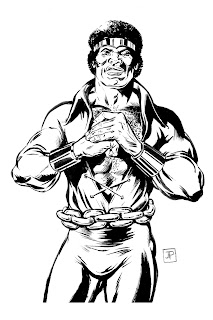 The first 16 stories presented in "Essential Luke Cage, Power Man" originally appeared in issues titled "Luke Cage, Hero for Hire". Written by Archie Goodwin and Steve Englehart, and penciled and inked primarily by George Tuska and Billy Graham, these tales are truly a tour-de-force of inner-city flavored superhero comics with a blackspoitation vibe so strong you could almost hear Isaac Hayes singing and guitar riffs in the background.

The first 16 issues of the series also comprise one long story arc that, while it contained numerous smaller tales they were all joined together by a strong supporting cast and the ongoing threads of Luke trying to atone for his criminal past and protect his new life from the ever-present threat of someone discovering he's an escaped convict. The stories also deal with issues of bigotry and racism in between and during Cage's battles against a quirky mix of inventive villains. Finally, the way the cast of characters and story develop in those first issues feel far more literary in nature than most comics. A prime reason for this is the fact that when characters are killed off, it doesn't feel like it's being done for shock value or as some gimmick to boost sales or create cross-over fodder, but rather because it is a natural development of what has gone before. It really is some of the best writing in the history of American comics. Heck, even the art is great; I'm not a big fan of George Tuska and a like Billy Graham's work even less, but both artists did the best work of their careers on the early "Luke Cage" issues; only issues #18-#20 where Tuska was inked by Vince Colletta feature better art.

My love for these early Luke Cage stories is heightened further by the two-part story originally from issues #9 and #10 where Cage crosses paths with Doctor Doom. They are some of the best Doom stories ever published, and they are the reason I have such an affection for Doom as a villain. In fact, they are among the early readings I did that I credit with me wanting to be a writer. And the fact that someone as wealthy as Doom stiffs Cage for his meager pay just because he can, and that Cage pursues him halfway around the world to collect that meager pay is just a great story with some fun interplay between the two characters in the second half. 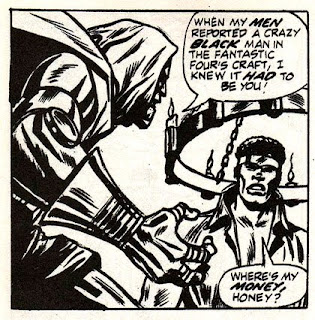 If "Luke Cage, Hero for Hire" had ended with issue #16, with Luke and his girlfriend Claire walking off into the sunrise of a brand new day, leaving behind them the shadows of the past and the shady characters that belonged in them, it would have stood as one of the great works of comicdom and would be spoken of with great lament. Unfortunately, comics being comics, the series continued on (under the title "Luke Cage, Power Man"). Although none of the tales that follow are bad--and art-wise some are even better than the early issues--the stories are never quite as engaging as they were in those first 16 issues. The final 1/5th of the book features a slow, but steady decline, with Cage facing the Circus of Crime and being stuck in a "The Night Stalker"-inspired tale making it obvious that the series' greatest moments are well behind it once page 500 of this collection is reached.

I've read a small handful of stories from the "Luke Cage & Iron Fist: Heroes for Hire" period, but I generally found them unimpressive in every way. Although the title lasted through the 1980s, ultimately being cancelled after some 120 issues, the best of those stories can be found in the "Essential Iron Fist" volume (which I will get around to reviewing in the space eventually).

Luke Cage has made sporadic appearances in Marvel's titles over the decades since losing his own book, with one of the most noteworthy being a stretch in "The Punisher" some 15 years ago by now, during which Frank Castle was turned into a black man via plastic surgery. More recently, Cage has shaved his head and grown a goatee to match the look of a modern blacksploitation character. I've not actually read any of the stories since the above-mentioned Punisher appearance, but I've heard nothing good about them.