Once upon a time, ninja dueled in the clouds...

Teenaged wizard-ninja Torawakamaru (Fushimi) of the Koga Clan must unmask the treachery of traitors working with members of the nefarious Iga Ninja Clan and rescue and rescue a princess (Ueki) from deadly danger. Along the way, he befriends a young Ninja wanna-be (Motoharu), who just happens to be the son of Torawakamaru's main foe (Tomita). Someone's not going to have a happy ending when it's all over.... 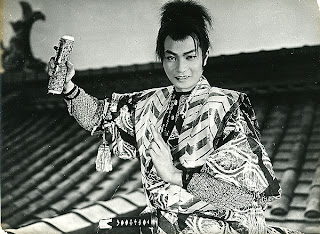 Much like zombies got a popular culture make-over in the 1960s--being transformed from relatively passive creatures of Voodoo spells, as seen in films like "White Zombie" into the spontaneously rising, murderous undead creatures that are the norm today, starting with "Night of the Living Dead"--so did Ninja morph from brightly clad war-wizards into the masked, shadow-draped assassins we are familiar with today.

"Ninjitsu" is one of those old-style ninja tales set within the context of the Warring States period in Japanese history, with the good guy Koga ninjas working for the righteous Toyotomi Clan and the evil Iga Mountain ninjas doing dirty work for the nefarious warlord Tokogawa. Countless ninja movies are set during this period, as it is here the historical roots of the ninja legend were planted, as the Koga and Iga clans provided talented mercenaries and spies for whichever warlord was willing to pay for their services. In fact, the Koga might be heroes in one movie (as they are here), but the most vile villains in another movie.

The heroic nature of the Koga Ninja in this film is highlighted by their unwavering dedication to honor, duty, and to their devotion to developing both their martial and magical skills to the highest possible degree. On the other hand, the Iga can only triumph through treachery and double-dealing, kidnapping children and holding them for ransom and even cheating during ninja duels! To solidify their evil, the head of the Iga Clan is even a bad father.

Whether they are of the Koga or Iga Clans, the ninja in this film rely first and foremost on sorcery and on martial arts swordplay second. They have shape-shifting powers, teleportation powers (both for themselves and others), telekinesis, telescopic vision, and other magical abilities that come or go as the plot requires them. And, naturally, they can sword-fight while flying through the air, and ultimately stand in the clouds for their final confrontation. 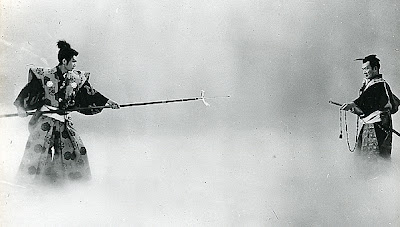 It's the nonsensical ninja magic that drives this movie, along with the rather sweet subplot about a young boy who wants to be a ninja and who loves his father, no matter how cruel he is. Although it's got wall-to-wall ninja action, it's not quite what we're used to these days, so viewers will either be put off by this aspect or amused by it. I fall into the latter category, so I found the film very entertaining. The gorgeous black-and-white photography also helped make the running time of just over an hour fly by.

If you're looking for a light-hearted fantasy romp that you can watch with young kids--and that they will probably find more entertaining than you will--this film is a fine choice.