'The Maltese Falcon' is a mystery classic

When private detective Sam Spade (Bogart) tries to solve the mystery surrounding the murder of his partner, he finds himself drawn into a struggle between eccentric treasure hunters (Greenstreet and Lorre) and a beautiful con artist who may or may not also be a coldhearted killer (Astor). At stake is the Maltese Falcon, a treasure of almost unimaginable value. 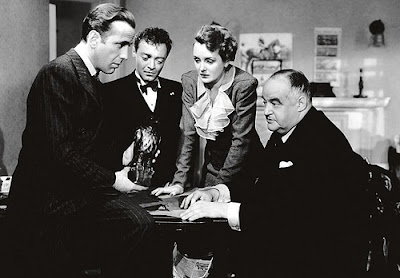 "The Maltese Falcon" is one of the few movies that truly deserves the label "classic." It's a perfectly paced detective story, with just the right mix of suspense and humor to bring out the maximum effectiveness of both elements as they play off each other.

The characters are quirky and unpredictable to the point where the final outcome of the story remains in question until the final few minutes of the film, and each actor is perfectly cast in their role. Even better, every line of dialogue is perfectly crafted and delivered with spot-on timing.

In fact, everything in this film is about as perfect as a film could possibly be. If you're a fan of the hardboiled detective genre or mysteries in general and you haven't yet seen this masterpiece, you owe it to yourself to change that.

Humphrey Bogart as the deeply flawed hero Sam Spade is particularly excellent in the part, as a man with questionable moral values yet a firm personal code of honor who finds a woman (Mary Astor's Brigid O'Shaughnessy) who at first seems capable of bringing out the best in him, but who ultimately may end up bringing out the absolute worst in him. While Spade is constantly fighting verbally and physically with the Lorre, Cook and Greenstreet's villains, it is Brigid who is Spade's main foil and she turns out to be one of the screen's greatest femme fatales, because Astor brings a vulnerability to a character who may be the hardest of any of the hard cases that populate this story that goes a long way to keeping the mysteries swirling through the plot open questions until the very end. As amusing and dramatic as Lorre and Greenstreet's performances are, it is Astor who is the true driver of the story, providing a great portrayal of a character that is almost as important as Bogart's Sam Spade when it comes to the success of this film.

There are only a handful of movies that I've watched more than once. "The Maltese Falcon" is one of those. Check it out, and I'm sure you'll see why.


Trivia: "The Maltese Falcon" was the third adaptation of the Hammett novel by the same title. This goes to show that not all remakes are bad. Some are even improvements on the original film. (Although, by all accounts, the 1931 and 1936 versions are pretty good, too, with the 19365 version being a spoof. I haven't seen either of those older movies yet, but both other versions are included in the DVD edition I've linked to above while the Blue-Ray edition only includes the 1936 comedy version, "Satan Met a Lady".)
Posted by Steve Miller at 10:22 PM