The Invisible Man takes on the Nazis!

It's 65 years since Nazi Germany was broken and tossed on the scrapheap of history. I'm marking that great acheivement with a mini-blogathon.

After he is threatened by Axis agents, Frank (Hall) decides to put the invisibility formula invented by his grandfather to use in the War Effort. He parachutes into Germany, teams up with a beautiful allied spy (Massey) and sets about destroying the organizers of a Fifth Column operation in the United States (Hardwicke and Lorre). 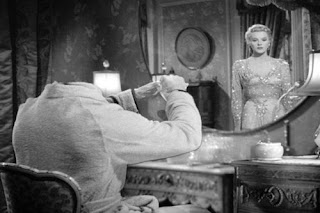 "Invisible Agent" is the second real sequel to "The Invisible Man". It's also an average WW2 propaganda film that shows the the Axis to be as foolish, evil and treacherous as can be imagined, while the Allies are brilliant and right-minded. Sort of.

While the Nazis are as nefarious as possible--decietful, backstabbing Hitler-worshipping sycophantic cowards every last one of them--our hero is also a bit hard to root for. Frank, as the invisible super-spy, is either dumb as a post or the invisibility forumula has a different effect on him than it had on those how used it in "The Invisible Man" and "The Invisible Man Returns". Instead of turning into the sort of megalomaniac who would try to get to Hitler and replace him as the leader of the Riech (which Griffin from the original film would almost certainly have done), Frank instead plays pranks on the Nazis at inopportune times--endangering both himself and deep-cover double-agent Massey--and falls into deep, coma-like sleeps at even worse times. Is it the invisibility formula at work, is Frank a moron, or is it just bad writing? Whatever the explanation, the Invisible Agent isn't much of a hero to root for... unless you're a 13 year old (who are probably the target audience for the film).

The target audience might also be the reason why it feels like a couple of punches were being pulled in this movie. While the Nazis are definately decadent scum in this movie, their evil doesn't even come close to approaching that displayed in indepdent productions from the time like "Hitler, Dead or Alive" or "Beast of Berlin", films that share many thematic and propaganda-content elements to this movie. Either, the fantastic elements of an invisible spy led Universal to choose to target it at a younger audience--and thus toned down some of the more unpleasant aspects of the Nazis--or maybe the very fact that Universal was a major film studio and corporation with international interests even in the 1940s and the two other films I mentioned were made by small operations limited the studio's desire to make a film that savaged the Axis as fully as it deserved.

The film is fun enough and the invisible man effects are decent--as is the idea that the invisible man here chooses to make himself visible using cold cream and a towel draped over his head instead of somehow finding yards worth of bandages everywhere he goes. The actors also give good performances, with only Peter Lorre failing to convince; he plays a Japanese intelligence agent and he is about as unconvincing as I would be if cast in the part of a Somali pirate captain. I can only imagine how bad the "Mr. Moto" films must be....