Chief Inspector Lohmann (Frobe) finds his vacation plans interrupted when he is called in to investigate a bizarre murder. When he himself is targeted for death, he finds the case getting stranger and stranger, with clues pointing to a conspiracy that reaches from the quiet halls of a local church, to a nearby prison, to mobsters from faraway Chicago... and perhaps even to the involvement of the megalomaniacal criminal mastermind Dr. Mabuse. 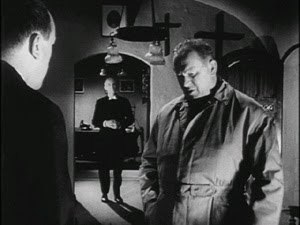 "The Return of Dr. Mabuse" is a light-weight crime thriller with Saturday matinee cliffhanger and James Bondian overtones, including a villain with a plot to conquer the world through the application of weird chemicals, science, and brainwashing. It's an entertaining film, if a bit predictable, and one that is probably enjoyed more by kids and those "young and heart" than by jaded viewers who find kicks in picking films apart. (Although I think even jaded viewers will be entertained by the Delivery Truck of Doom, and will enjoy guessing at what character is Dr. Mabuse in disguise.)

One major downside to this film is that the acting seems a bit wooden, but I'm not sure how much of this is the fault of inferior actors used for the English dubbing. Frobe is certainly a better actor than one gets the sense of here, and I recall his previous outing as Inspector Lohmann as being even better than his turn as the Bond villain, Goldfinger.

Trivia: This film revived a pulp fiction villain that had slipped into into obscurity, but which had first been brought to the screen in films directed by legendary German filmmaker Fritz Lang between the years of 1922 and 1933. During the 1960s, six Mabuse films were released, before the evil doctor once again retreated into one of the many dark recesses of the pop cultural universe.
Posted by Steve Miller at 2:30 AM