The Desert Peach takes to the air! 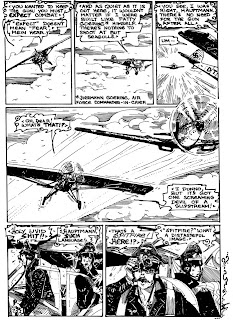 In the second volume of the collected "The Desert Peach" tales, Donna Barr continues to develope the fictitious brother of Field Marshal Rommel, Colonel Pfirsich Rommel, and the misfits that make up his command staff in the Afrika Korps' 169th Support and Gravedigger Battalion. It's the most fun you'll ever have with the German Werhmacht of WW2, and one of the rare times where you'll find yourself on the side of the Germans while reading. Well, for the most part, because even here there are Nazis to dislike and outright hate.

There are three tales in the book, and every page will have you at least smiling and often giggling.

In the first tale, "Is There a Nazi in the House?", Berlin big-wigs are coming to inspect Pfirsich's base camp with the hopes of finding something to hold against his politically unpopular brother. When he tries to find members of the Nazi Party who can meet-and-greet the visitors, he discovers that no one in is command seems to ever have joined, including the battalion's most fervernt Nazi supporter. IT's a hilarious story as the officers of the Gravedigger Battalion grow increasingly paniced... until they find their single Party Member in the most unexpected place. But even once they've accomplished that, their troubles are not over, and the story only gets crazier.

In the second tale, "Flights of Fancy", Pfirsich takes to the air in his peach-colored spotter plane in order visit his brother's command camp. Along the way, he finds himself in a literal dogfight with a British Spitfire and in a metaphorical ethical dogfight with both his pilot and a German Ace intent on shooting down the British plane even if it's not necessary. The ethical quandry that Pfirisch is confronted with becomes all the more frustrating for him as the Ace in question is his long-time gay lover, a man who decidedly does not share the colonel's attitude that suffering and spilled blood should be minimized even in war-time.

Third, in "A Day Like Any Other", we are introduced to the entirety of Pfirshich's command staff, including his radio operator who has a most unusual disability, through the eyes of the battalion's new chief medical officer. (The new prisoner of war that the unit aquires also serves as yet another way for Barr to showcase the universal respect that her character has for life and human deeceny and the way he approaches everyone with the initial assumption that they share his refined and civilized values.

The book is rounded out by a short story loosely based on real events in Erwin Rommel's homelife, as well as his relationship with his wife and son Manfred. It's a cute tale that infuses a historical figure with a humanity that he is rarely credited with in ficitonal portrayls.

Some of the humor in "Desert Peach" does come from the fact that the younger brother of the more-macho-than-macho legendary Field Marshal Rommel is as flamingly gay as they come, but far more of it comes from the fact that he's a man of honor and sensitivity surrounded by brutes. A very appealing aspect of these tales is also that his high moral character rubs off on nearly everyone he meets.

It makes one wish that reality functioned as it does in "The Desert Peach," because if we were all like Pfirsich Rommel, we all would be living in peace, harmony and absolute tolerance of our differences.

While the book reviewed in this post is long out of print, you can read the stories it contains, as well as many others, by clicking here. (I don't know how long the stories will be available, though.)