'The Complete Geisha' explores nature of human heart and soul

"Geisha" was the second comic book series from Andi Watson (perhaps best known as the writer of Dark Horse's "Buffy the Vampire Slayer" comics. In a future where life-like androids are used as sextoys/prostitutes and servants, the operator of a successful security company "adopted" a sex 'droid, wiped her initial programming, and raised like his own children. The result was Jomi, who, although human in every way except for her android body, is now struggling to find her place in a world that sees her as something less than human. 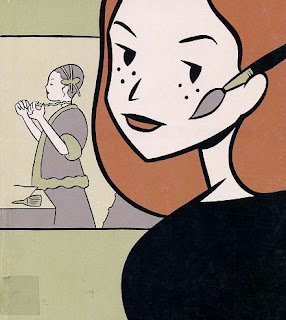 Jomi is a talented artist, and she dreams of making her living doing art, but critics denegrate her work, saying it is soulless and crude because she's an android, which in turn makes it hard for her to sell her paintings. When a crimelord approaches her with an offer of an obcene amount of cash to produce a forgery for him, she has to choose between the satisfaction of knowing the critics who hate her will be fawning over a forgery she created, or being true to her art and soul and turning down the offer. Along the way, she befriends a neurotic supermodel and defends her against her battlebot-driving ex-husband, and learns the ins-and-outs of her adopted family's security business.

Aside from the main story of Jomi vs. The Art Forger and the Battlebot, "The Complete Geisha" also contains the various short stort stories featuring Jomi and the rest of the "Geisha" cast. Like the main story, these are very well-done. These short stories also give the reader some insight into how Watson's style developed as he worked on the series.

"The Complete Geisha" presents excellent comic book stories that have action, humor, and lots of heart. It's the sort of comic book work that one wishes more creators were able to produce.