'A Life at Stake' stars a miscast Angela Lansbury

An architect (Anders) attempting to come back from a business failure is approached by a wealthy couple (Lansbury and Dumbrille) who claim they want to help him get back on his feet so he can build houses for them. The husband insists the architect takes out a large insurance policy so their investment can be recovered if something should go wrong. When the architect starts having unexplained accidents, he starts to fear that he is the investment, and that his death is the pay-off. 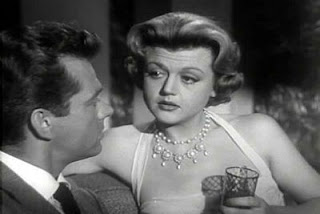 "A Life at Stake" is a slow-moving, completely predictable (despite the far-fetched, convoluted nature of its plotline) film with a fairly dull main character and a pair of villians who aren't much better. In fact, the only performer here who displays any charisma whatsoever is Claudia Barrett, who is featured as the innocent younger sister of Lansbury's character.

"But what about Angela Lansbury?" some of you ask.

Well, I think she is horribly miscast here. She simply isn't the slinky, femme fatale type. This part required either a Lauren Bacall-type, or, at the opposite end of the scale, a Heather Angel-type. Lansbury is neither, and she is terribly miscast.

That said, she was more convincing in a similar role in "Please Murder Me", because she wasn't playing a straight-up "scheming trophy wife" as she is here. In the other film, Lansbury WASN'T playing an evil hussy... or so it seemed....

"A Life at Stake" is deserving of its obscurity. It can be found with 49 other black-and-white film noir/crime dramas, or on a double-feature DVD with the above-mentioned "Please Murder Me". As such, it's harmless filler. It's not a film worth seeking out, unless you're the president of the Angela Lansbury Fan Club.