A violent bank robber (Averill) passes himself off as a member of the Leopard Lodge to conceal his identity and hide among its members onboard a cruiseship bound for Los Angeles via the Panama Canal. Ace reporter Torchy Blane (Lane), her police detective boyfriend, Steve (Kelly), and a rival reporter (Williams) board the ship in the hopes of identifying the robber before he escapes with the stolen money. Bumbling detective Gahagan (Kennedy) is also aboard, as a member of the Lodge and Steve hopes he'll be able to spot the fraud. 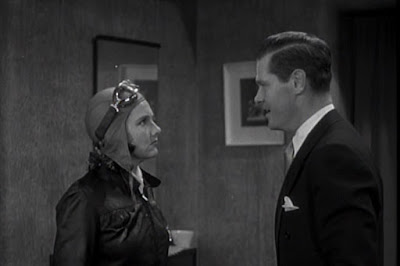 In this, the fifth entry in the "Torchy Blane" series, Glenda Farrell and Barton MacLane are replaced by Lola Lane and Paul Kelly in the roles of Torchy Blane and Steve McBride. This recasting is partly to blame for this being the weakest film in the series yet, but even more blame can be placed on the writers of the screenplay.

First, Paul Kelly is a decent actor, but he's not quite right for the part of Steve McBride, because his slighter frame makes him less of a presence. It also doesn't help that the writers have given the character a streak of sexist immaturity that hasn't been present until this film: For much of "Torchy Blane in Panama"'s running-time, viewers have the sense that Steve and the reporter he teams up don't want Torchy's girl cooties disrupting their male bonding (which include an ongoing and obnoxious prank on Gahagan).

Second, while Torchy is more of an action heroine in this film than she's ever been before (she parachutes from an airplane, she scales the sides of ships and walls, throws punches, and more!), she ultimately ends up as a damsel in distress who must be rescued by Steve from the film's villains. She's as witty as ever, and Lola Lane makes of a good replacement--even if it's odd to suddenly have a brunette playing the lead character in a series that's made a big deal out of the fact she's a blonde--but she is let down by the script-writers who didn't seem to know how to write a woman who didn't need to be rescued.

Thirdly, while the "Torchy Blane" films have always been B-pictures, this is the first one that feels like a 1930s cheapie comedy/mystery. The story focuses more on the clownish antics of Gahagan than ever before, cruel jokes on other characters for no good reason are considered par for the course, and the cops, in general, are so dumb that you're surprised the manage to remember to breathe. While Torchy is ultimately reduced to a damsel in distress, she's still the smartest person around, because the cops are so damn dumb.
"Torchy Blane in Panama" is a major step down quality-wise from previous films, but it still entertaining. The dialogue is just as witty in previous films, and there are a few moments of genuine tension. Lola Lane also makes a decent Torchy, but she is ultimately let down by a script that's too much generic 1930s laff-bag, and too little Torchy Blane.