'The Sawdust Ring' is a mostly lost silent movie... but what remains is excellent 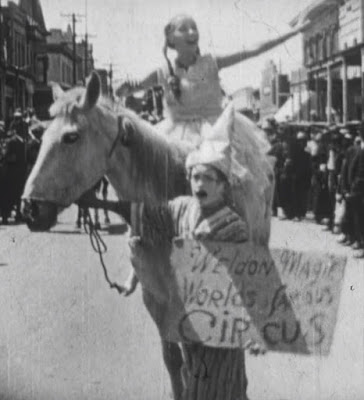 "The Sawdust Ring" was an early starring role for Bessie Love, and it's easy to see why she was a big star during the silent era. She's pretty and her acting style is emotive without being overly stylized. It's easy to see how she was able to transition to the stage some 10-15 years later, after the arrival of talkies and her film career stalled.

When it was first released in 1917, "The Sawdust Ring" ran about an hour and it featured a far more involved plot that what we are left with today... which is a 10-minute version that was made for home screening and released in 1926. That 1926 edit is what this review is of--a brief and sweet fantasy story about two kids destined to be circus performers. Notes on both IMDB and Harpodeon describe additional cast members and character background stories that aren't to be found in this abbreviated version. It made me wish to see the full-length film. That will never be possible, because like the vast majority of silent movies, the original version of "The Sawdust Ring" has been lost.

What we're left with, however, is an well-done abridgment of the original movie that shows what great screen presence Bessie Love possessed (and why D.W. Griffith knew she was going to be a star early on). The rest of the cast are also good in their parts, and the staging and filming of every scene is top-notch. Even if you're one of those people who don't usually like silent movies, I think you'll find this one appealing. (If you're an Amazon Prime subscriber, you can watch it for free.)