While on a once-in-a-lifetime vacation on Catalina Island, three laundry workers (Granger, Tevis, and Tilbury) pose as high society ladies. When the two younger ones meet a pair of handsome rich men (Richards and Sutton), and are mistaken for relatives of a wealthy yacht owner, the women decide to take full advantage of the situation. Unfortunately for them, the wealthy young men are also just posing... 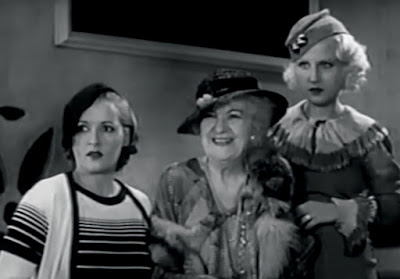 The sixth installment in RKO's "The Blonde and the Redhead" non-series series (a "non-series" in the sense that while the same core performers are featured in most of them, they are playing different characters in each film) is different from previous ones in a couple different ways. First, June Brewster has been replaced as the Redhead by Dorothy Granger. This change is hardly noticeable, except Granger's comedic timing is better than Brewster's (which could go a long way to explaining why Granger's career continued into the 1950s and Brewster's was essentially over at this point). Secondly, the actual lead here is Zeffie Tilbury, both in the sense that she's the instigator of plot complications as well as portraying the character with the most lines and screen time. Usually, its some lie or clever idea from one of the "girls" that gets them in trouble. It's only fair that Tilbury should get to take center stage in this film--she had been performing on stage and in films for 20 years when this film was made--but it's still an unusual move, given the formula of the series.

"Ocean Swells" is a comedy of errors and it's very amusing even while being absolutely predictable. From the moment "Auntie" (Tilbury) promises that she's going to hook her young friends (Dorothy Granger and Carol Tevis) up with rich men, viewers have a sense of where this film is going to end up. As is often the case in the "The Blonde and the Redhead" series, the stakes keep getting higher and the situation gets more and more complicated as the film unfolds, and so the viewers continued attention is assured to be held.

The film's funniest moment come during the "seduction" scene between Tevis and Grady Sutton; it plays with the height difference between the two actors--with Tevis barely clearing 5' and Sutton being over 6' tall and Sutton playing his typical romantically challenged character. That one scene is worth a whole Star in my rating, by itself.