'Tomorrow at Seven' is a one-suspect mystery

A writer (Morris), working on a book about the serial killer known as the Black Ace, gets close to his subject while onboard a chartered flight where another passenger becomes the maniac's latest victim. 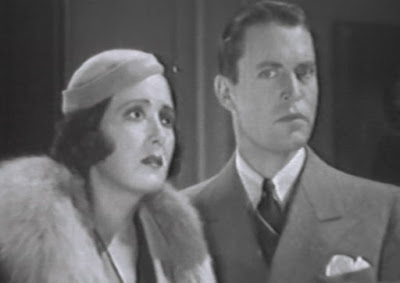 "Tomorrow at Seven" is one of those films that needs to be remade. It's a story with TONS of potenial that is mostly unrealized because no risks are taken in the way the plot develops... and what is set up as the ultimate locked room mystery (a murder takes place with all suspects and potential victims together, in the air, in an airplane!) instead unfolds as a mildly interesting comedy with some dramatic moments and romantic overtones.

Maybe it's because it's 85 years since this film was made, but all the characters had barely been introduced when I settled upon who I thought was the Black Ace. I turned out I was right, despite the fact there was a second character who could just as easily have been the killer (and a third who would have been slightly more far-fetched but still plausible)... and I was right, because the cast of characters are the stock figures you expect them to be based on their roles at the beginning of the story and the physical appearance of the actors playing them; once the handsome, romantic male lead is crossed off the list as the murderer, there's really only one suspect left. (That said, there are some nice steps taken to cast suspicion around on a couple different characters... and what a great movie this could have been if more bravery had been shown in the plotting.)

As it stands, "Tomorrow at Seven" isn't a bad movie... it's just unremarkable. All the actors are good in the parts, the film moves along a good pace, and there's never a dull moment. Even the comic relief characters--a pair of bumbling police detectives (portrayed with great charm by Jenkins and McHugh)--are good, because they are actually funny instead of just annoying or stupid as is often the case in films from this period.

If you like "old dark house" flicks, or light mystery films from the early 1930s, "Tomorrow at Seven" is worth checking out if you dont' have to go out of your way for it.

(For my part, I think "Tomorrow at Seven" has inspired me to do another random mystery plot generator for the NUELOW Games blog, like "Who Killed Buck Robin?" and "Who Killed Major Payne?")