'The Lady from Shanghai' is a beautiful mess

A chance encounter with Elsa (Hayworth), the younger wife of a famed trail attorney (Sloane), ends up drawing an independent-minded sailor (Welles) into a web of jealousy, hatred, and murder. 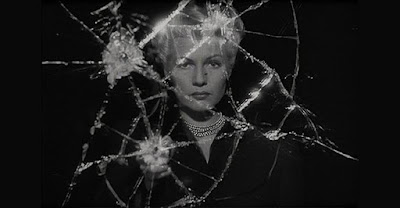 "The Lady from Shanghai" is, like every Orson Welles-directed film beautifully shot and visually ahead of its time. It is also features a cast that is perfect for their roles, with Rita Hayworth, as the title character, and Glenn Anders, as a creepy lawyer, being particularly excellent. Unfortunately, the fine performances and brilliant visuals are undermined by a plot-line that's jumbled and haphazard and which leaves the characters underdeveloped and just a little too mysterious. Hayworth's character in particular could have done with a little more background exposition.

Film historians (including Peter Bogdanovich in the documentary included on the version of the DVD I watched) say that Welles cut of the film was almost an hour longer than what was ultimately released by Columbia Pictures. While I think two-and-half hours might have been a big much run-time wise, I also wish the studio hadn't been quite so aggressive with their chopping. I can't help but wonder if some of the character actions would have made more sense if we what we've been with hadn't been a little closer to what Welles' had intended. (He was so unhappy with the final product that he had his director credit left off--even if it was the score and the sound work in general he the most upset about.)