'Second Chorus' is an obscure gem

When a pair of musicians, Danny and Hank (Astaire and Meredith), attempt to dodge Ellen (Goddard), a debt collector, by (literally) charming the pants off her, they end up on the fast track to fame with her as their booking agent. When she is later hired away by the famous band leader Artie Shaw (Shaw, playing himself), the two friends begin to sabotage each other in a bid to earn Ellen's romantic attention. 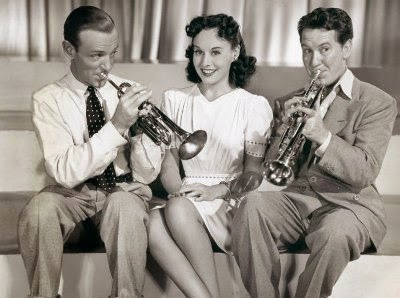 Fred Astaire described "Second Chorus" as his worst movie. He may not have liked it, but it's a lot of fast-paced fun, and chockful of great musical numbers and strong performances from the entire cast. Goddard is spectacular, as usual, and Meredith's comedic performance here really makes one wonder what sort of super-star he might have become if his career hadn't been detailed by McCarthyism during the 1950s.

The only complaint I have about the film is that the main protagonist, played by Astaire, is a king-sized jerk. I understand that the tricks he plays on his friend Hank to gain the upper-hand romantically and professionally are supposed to be viewed as comedic by the audience, but time and again, he resorts to an almost scorched earth sort of approach with an apparent desire to destroy his supposed best friend just so he can tell himself that we "won." In the process, he ends up sabotaging himself as well--and this karmic justice keeps the character from becoming completely unsympathetic--but his 11th-hour conversion to Nice Guy comes a little too late to win me over as a viewerm even if it does get him the girl. (That's not a spoiler... given that it's Fred Astaire vs. Burgess Meredith, it was a foregone conclusion who Paulette Goddard would end up with. Except, of course, in real life, where Meredith and Goddard ended up as a couple and eventually married.)

Hardcore Fred Astaire fans may be disappointed in the film for the same reason I suspect Astaire rates it as the worst of his efforts: He does very little dancing in it. There's really on one remarkable routine where he takes to the floor with Goddard at roughly the halfway point. But of those who enjoy big band swing music and 1940s comedies, "Second Chorus" is going to be time well spent.