Rocketpacks never go out of style!

At least that's what L.L. Hundal and I hope, as we're replacing the scientific fisticuffs of girlfriends Jill Trent and Daisy Smythe (of "Jill Trent, Science Sleuth") with the high-flying adventure of inventors Cal Martin and Doris Dalton (of "Rocketman") in our ongoing Science Sleuths comic book/rpg series.

The change is happening in part because the B-feature, "Spider Queen", is coming to close with the just-released issue #3. The intent all along was to replace it with "Rocketman," but as we started work on Science Sleuths #3 and beyond, we decided to change our plans slightly. The initial plan was to burn through our inventory of Jill Trent stories as quickly as possible, but that meant we'd be out of them as of Science Sleuths #4. We've been successful enough with the series so far that we think it might have some legs, so instead Jill will become the B-feature while Cal and Doris step into the front slot.

Here's the first page of the first "Rocketman" story to give you a little taste of what's being offered. The full tale can be read in Science Sleuths #3. (Click on it for a larger, more readable version.) 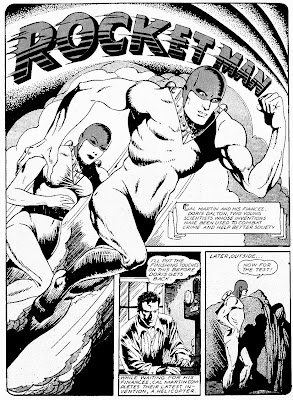 While the artwork on the "Rocketman" series is more pleasing to the eyes of modern readers than some on "Jill Trent, Science Sleuth," the writing is generally pretty weak. Current plans call for yours truly to write partially new scripts for at least one "Rocketman" story per issue. For Science Sleuths #3, there's only one bit of dialogue that I rewrote, and I think it made the story 100 times better. If you get the book, I'm sure you'll be able to spot it due to the inconsistent lettering. :)

We hope you'll give Science Sleuth #3 a try, giving Spider Queen a nice send-off while giving Cal and Doris a warm welcome. If you do check it you, be sure to tell us what you think. If you have a favorite Golden Age comic book scientist or inventor who you think needs to be returned to the spotlight, let us know about that, too. We might be able to fit stories featuring your favorite characters into future issues.

Meanwhile, please enjoy these illos of women with rocketpacks, which will be included in a sci-fi themed forthcoming NUELOW Games stock art collection.