'Lost in the Stratosphere' is light but fulfilling

Two best friends and daredevil military pilots, playboy Lt. Tom "Soapy" Cooper (Cagney) and Lt. Richard "Woody" Wood (Nugent) see their friendly rivalry turn nasty when Tom unknowingly goes on a date with Wood's fiancee (Collyer) and subsequently steals her away when they fall in love. But when they are tapped for a dangerous test flight that will take them into the strasophere, they must set aside their grudges if they are to survive. 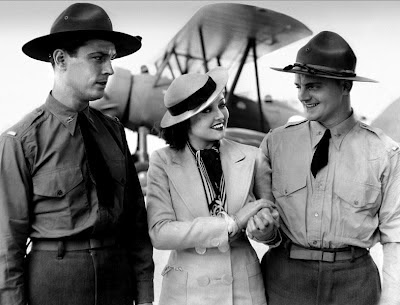 For about half of its running time, "Lost in the Stratosphere" is a fairly straightforward romantic comedy/buddy picture, with Soapy and Woody trying to outdo each other with bravery in the air, and by pranking each other on the ground. It's all fun and games, even if Soapy is something of a jerk and Woody is a bit of a dish-rag, until a girl they both truly love comes between them, Woody feels betrayed, and the film spends some time in melodrama territory. And finally, it becomes something of an action film in the third act, with Soapy and Woody struggling to save their lives in an experimental balloon.

This film belongs to William Cagney and Eddie Nugent in every sense. Not only are they equal co-stars, even if Cagney gets a little more scree time, but they are also the only performers who give truly colorful performances. June Collyer is her usual beautiful self, but she is really little more than window-dressing and her character has little definition beyond a vague sense that she was always a little too much woman (or maybe a little too much tomboy) for Woody to handle, even if she had never met Soapy. Aside from the characters portrayed by Cagney, Nugent, and Collyer, none of the others in the film rise above the level of stock figures. This isn't necessarily a negative, as it gives room for Soapy to be redeemed somewhat from pure jerkhood, but it would have been nice to see a little more of Collyer and her character.

One thing that works better in this film than many other flicks that are supposedly about pilots and high-flying action but end up being earthbound due to their low budgets, is that this film delivers just enough hint of aerial excitement to satisfy. Through the effective use of special effect model shots at the films beginning, and effective use of stock footage toward the end, as well as some nicely done sets, lovers of the old-time "men in their flying machines" will walk away from the movie just as happy as those who came for the old-timey buddy pic rom-com action.

Check it out. It's another fun little item that's laying neglected in Hollywood's ash-heap of history.