A sexy alien queen (Hanold) and her pointy-eared second-in-command Dr. Nadir (Cutell) come to Earth to abduct bikini babes to replenish the breeding stock on their homeland. Unfortunately for them, their arrival on our world interferes with the test-flight of a cybernetic astronaut (Reilly), causing his ship to crash near the alien landing site. 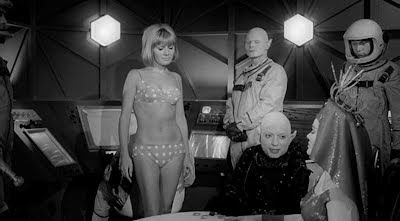 Some movies derive their entertainment value from the fact that you will spend the entire time you're watching wondering if what you're watching was really that nonsensical on paper, and how one director could make so many bad decisions in the course of one movie.

Even in 1964, the "Mars needs women"-type scenario must have seemed silly, although it does provide an excuse to show attractive women in little bikinis so one can understand why the filmmakers and viewers ran with it. But one wonders what bizarre fetish the writers or director must have been trying to bring to the screen with the oddball "physical exam" that the aliens use to determine the fitness of the women for alien breeding stock.

That said, for a film that was clearly designed to show off fit birds (to borrow a phrase from Joe Bloke's excellent blog) the director made a bizarre choice in casting Playboy-Bunny-turned-actress Marilyn Hanold and yet hardly showing her body off at all. Viewers can see hints of a sexy costume, but she spends most of the movie seated, so it hardly gets shown off. 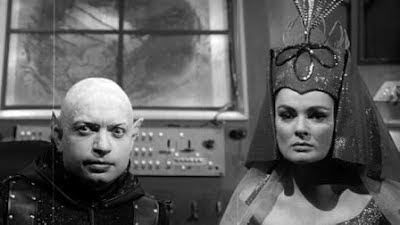 The only thing that makes the film mildly interesting, aside from the bikini babes if you're hard up, is when the heroine gets grabbed by the aliens and almost becomes chow for the Spacemonster of the film's title, and the runaway robot who stumbles his way through the movie to ultimately serve as something of a literal deus ex machina plot device. Unfortunately, he doesn't quite qualify as a "Frankenstein" in any sense, but instead serves as an illustration of the illiteracy that seems to have been a mainstay of the movie business from the get-go.

(By the way, if I had watched this this movie three-four weeks ago, "ROLF: Attack of the Commies from Jupiter" may have been an unauthorized adaptation of this film given there are some similarities content-wise. Heck... there may still be one forthcoming, given its mostly designed. :) )
Posted by Steve Miller at 10:33 PM