After his daughter (Faye) is victimized by a pedophile, a school principal (Allen) finds himself faced with indifferent law enforcement and fearful citizens of the small town he lives in... because the man who abused his daughter is the patriarch of the rich family who unofficially runs the community. 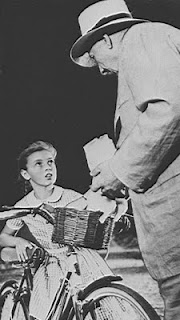 If you're prone to write off Hammer Films as merely the creators of old horror movies and cheap thrillers, you need to see this movie. It's the one of the most realistic treatments of a child molestation case to ever be put on film, with its portrayal of people willing to allow a known pedophile prey on their children in order to preserve their jobs and reputations, and with its portrayal of the difficulty the justice system can face when attempting to address criminals like this--especially when they hire ruthless attorneys with morals not much different than their own.

Painfully and frighteningly realistic--and perhaps even depressingly so, as not much seems to have changed when it comes to the world turning a blind eye toward and making excuses for rich and powerful pedophiles--this is a film that builds steadily and relentlessly toward a shocking finale... which must have seemed even more-so to audiences in 1960 when this film was first released. Great performances from child actress Janina Faye and Patrick Aylmer go a long way to making this movie as great as it is--Faye is perfect as girl around which the story swirls, coming across as believable and realistic throughout; while Aylmer manages to portray menace and outright evil in his scenes without uttering a word. The talent of these two performers is what makes the climax of the film as harrowing as it is... especially once it becomes clear that the filmmakers are going to break one of the biggest film taboos of all and that a little child will be dead by the hands of a human monster before the end credits roll.

Although this is probably not one of Roman Polanski's favorite films--not only does it deal with the damage pedophiles can do to victims (even when they don't rape them, like he does) the pedophile here is ultimately brought to justice--it is worth seeing by anyone who can appreciate a well-made drama.