English botanist John Rollson (Cushing) joins an expedition led by American explorer Tom Friend (Tucker) to find proof of the existence of Yeti, the Abominable Snowmen of the title. Once the expedition is deep within the frozen wastes of the Himalyas, Rollson and his fellow explorers learn that they aren't hunting some subhuman primate, but are instead tracking what seems to be highly intelligent creatures with supernatural abilities. What's worse... the hunters eventually become the hunted. 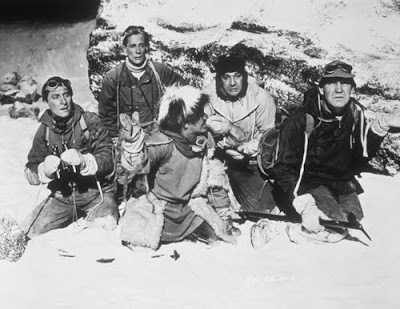 "The Abominable Snowman" is an average thriller with great sets, great performances from all the featured actors, and a tense, suspenseful finale. Unfortunately, it moves a bit too slowly, but when it does get to the action or the drama, the pay-off is worth it.

The greatest weakness of the movie is the fact that it doesn't just wear its message on its sleeve, it shoves it down the viewers throat with a number of long speeches delivered in turn by Tucker and Cushing. Yes... man is a destroyer, and man is but a guest on this planet, and life is precious and nature is precious.... The viewer gets the message just from the way the various characters behave, and the way the Yeti behave. The speechifying gets dull after the first run-through, despite the fact that the lines are delivered with great skill and fervor by the actors.

Despite this flaw, I enjoyed the film for the great performances by its actors and the sets. The story also has a numer of chilling moments. In balance, it's worth seeing.