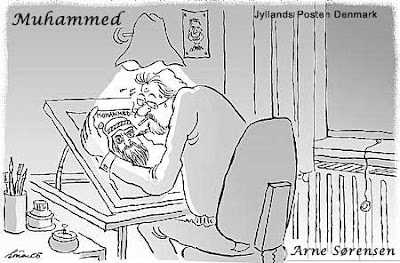 On May 20, I'll be posting an original piece of art to this blog, a cartoon of the Prophet Mohammed himself (may peas be upon him)!

I, along with what I hope will be hundreds (maybe even thousands!) of bloggers and artists, will take a stand that our governments and media-owners have generally not been willing to, to stand up and in our own small way show the freakish, bloodthirsty Muslim terrorists that we're sick of their attempts to quell freedom of expression.

(And I don't really care about the "moderate Muslim" or "good Muslim" and their taking of offense. They should be offended at the psychos who claim to be the "good Muslims" and who want to kill over books, cartoons, or even the presentation of factual information about Islamic culture, history and the Prophet Mohammed (may fleece be upon him)).

For some background on "Everybody Draw Mohammed Day" as filtered through me, check out the following links. (In brief, the idea sprang from a cartoon drawn by an artist who had no idea what she was starting.)

From April 27: May 20th is the first annual Everybody Draw Muhammed Day (well... not really)

From May 4: May 20th IS the first annual Everbody Draw Muhammed Day!

I hope anyone reading this will take part in Everyone Draw Mohammed Day and publish a cartoon of their own.