The Avengers: Two's a Crowd

Super-spies John Steed (Macnee) and Emma Peel (Rigg) are on the verge of unmasking a mysterious Russian agent, but his crafty assistants (Glover, Mango, Machado, and Morris) stymie their efforts by replacing Steed with a lookalike (Macnee) in their employ. 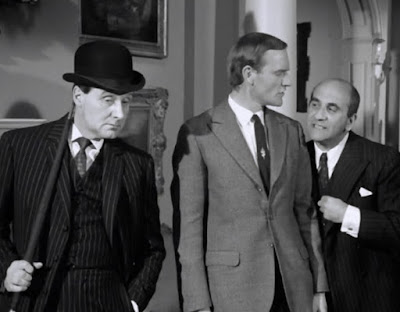 "Two's a Crowd" got off to a really fun start for me. I watch so many old films with cheap and pathetic effects that I thought I was in for another "treat" in that department--but then the model turned out to be a model. (The foe of the Avengers loves model airplanes and he uses remote controlled model planes to committ assassinations.)
This bit of trickery/playing on perception sets the theme for the entire episode where many things aren't what they seem and models take the place of the real thing... but can be just as lethal. John Steed's double is literally a model: The man is a male fashion model, and while he may not be a trained combatant, like Steed, his completely lack of morals and regard for other human beings makes him every deadly to those who think he's Steed.
Storywise, this is a fast-paced episode that's as full of twists and turns as one would expect a tale involving a "faceless" assassin whose identity is kept secret by a cadre of ruthless assistants, traitorous dopplegangers, and elaborate assassination schemes. The balance between humor and suspense is expertly maintained throughout, with lots of witty banter, quirky characters, and lots of fun situations. The best scenes involved Steed's evil double--with the fashion show where he is first introduced being absolutely hilarious, and the scene where Emma Peel has to decide if Steed is himself or the double and whether she should kill or not is quite suspenseful.
The best thing about the episode is the performances by Patrick Macnee--and yes, I did say "performances". Not only does he play two characters in the episode, but the fake Steed goes in and out of the character of Steed... so Macnee is playing a character who is playing John Steed. It's lots of fun to watch a talented actor getting show off!