After his dog is kidnapped, Mickey Mouse must brave the dangers of a mad doctor's haunted castle to save him. 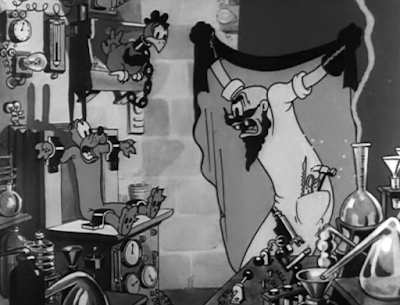 "The Mad Doctor" is another one of those early 1930s cartoons that's equal parts comedy, surreal weirdness, and horror--and it ranks among the greatest of them. It moves at a lightning pace, is full great music and even greater animation, and the Mad Doctor may well be one of the greatest Disney villains ever! This six-minute film is a prime example of what made 1930s Disney so spectacular.

Sadly, the film falters at the end. While the ending may be sweet, it's also weak and something of a cop-out. It knocked this otherwise fun film from a high Nine to a low (and perhaps too generous) Eight on my ten-star rating scale.