Tom and Jerry are cookin' with 'Pots and Pans'

Another day dawns at Tom and Jerry's Diner. Hash is slung and songs are sung. 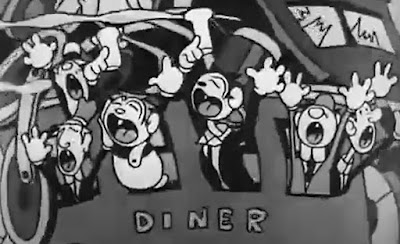 "Pots and Pans" on May 15, 1932, and it was the tenth installment in the "Tom and Jerry" series. Our heroes are engaged in yet another business venture in this one--they operate a diner inside a converted railroad car. Subsequently, all the gags and zany action revolve around short-order cooking and the odd characters who are demanding to be fed.

Like most "Tom and Jerry" cartoons, this is essentially an animated music video, with the songs being the main attraction. There is almost no spoken dialogue in the film, and there is one scene where it's disposed of with silent movie-style pantomime. Further, this installment is almost entirely plot-free, with the music and the diner setting serving to string together a series of more-or-less self-contained gags. It's a mostly swift-moving film, and if you have enjoyed other "Tom and Jerry" adventures, you'll enjoy this one as well. The animation is a bit more simplistic than the norm, and the pace falters a bit as the climax is building, but overall it's a solid bit of fun.

But don't just take my word for it... I've embedded "Pots and Pans for your viewing pleasure below!