Frank Bigalow (O'Brien) is a small town accountant on a spur-of-the-moment vacation in San Francisco when he is poisoned by a slow acting toxin with no hope of surviving. He spends his last few hours of life trying to solve his own murder. 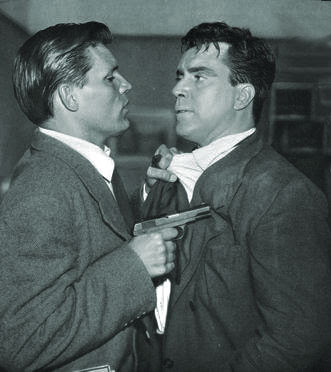 "D.O.A." is one of the greatest murder mystery films ever made, as well as a stellar example of the film noir genre as it manifested in American movies. It turns a number of movie and mystery conventions on their heads, and even some six decades after it was made, it feels fresh and exciting as one watches it unfold. The pace grows more frantic as the literal deadline for our hero approaches while the mystery of why he was poisoned seems to grow more elusive with each supposed clue he uncovers. It's a movie that holds up to repeated viewings--it almost demands it, because once you know the answer to the mystery, it's great fun to see how certain scenes take on a different tenor. What this film does with snappy writing, moody lighting, and artful cinematography is amazing... and I wish there was some sign that modern filmmakers watched movies like this and studied them and took lessons away from them. Sadly, this does not appear to be the case.

As great as I think this movie is, it's not perfect. There are a couple of ham-fisted attempts at comedy early on, as Bigalow walks into the middle of a salesman's convention at his hotel; one of the film's villains is portrayed by a performance that goes just a bit too far over-the-top in this film which is otherwise marked by fairly low-key performances; and the overly sinister and melodramatic appearance of the poisoner in the jazz club when a close-in shot of a patron switching Bigalow's drinks wold have been far more effective and in keeping with the rest of the scene. Despite my sense that the director went too far with these three elements, they still make sense within the context of the film, and given the greatness of what surrounds them, they are easily forgiven.

If you're a lover of mystery films or the film noir genre, you absolutely must see "D.O.A.". This goes double if you fancy yourself a writer or a filmmaker; we need more work like this these days. I thought I had reviewed this film years ago, but since I can't seem to find any sign of a post, I must never have gotten around to it. So, although my intent was to just make an entry in the "Classic Cinema" series and give you the chance to watch this great film right here, I figured there was no time like the present.

And there's no time like the present for you to watch "D/O.A."/ I've embedded it below for your enjoyment.