During the 1980s, Barry Blair and Aircel Comics were front and center for the "black-and-white boom"... and Blair rode the wave as the "black and white bust" crashed onto the shores of comics publishing during the 1990s and ended a very exciting and creativity-filled time in the North American comic book industry... a time of such creativity and comics in such a spread of genres that had not been seen since, perhaps, the 1940s. And at the rate things have been doing in the years since, i don't think we'll ever see it again.

Aircel Comics published some of my favorite comics of that period, and Blair created, wrote, and/or drew many of them. I eagerly awaited the arrival of each new isssue of "Samurai", "Elf Lord" and "Dragon Ring"/"Dragon Force" when those titles were at their height, either as black-and-white comics, or, for a time, color. In fact, I first became interested in game design as possible income source when an idea for an RPG (which was my main vocation from 1993 to 2003, and which continues to be a strong sideline) that could be serialized in the back of "Elf Lord" struck me... and Eiwin Mark, editor at Aircel, seemed interested in the proposal.

The idea ultimately came to nothing as Aircel hit a rough patch during 1988 during the first signs of trouble in the booming alternative comic book market, was acquired by Malibu Graphics, and everything changed. Such is life. (Echoes of that approach to publishing an RPG have been present in NUELOW Games' recent "ROLF!" game line that I've been producing, and it may become fully manifested in a possible new product we are looking into developing... time will tell.)

The notion of an "Elf Lord" RPG wasn't the only thing that fell by the wayside during Aircel's transition. There was the extremely interesting three-issue mini-series "Jake Thrash", a cyberpunkish dark future story about a drifter squaring off against a group of man-eating mutants to save the lives of some young thrill-seekers too dumb to stay out of the bad parts of a war- and toxic-waste scarred urban sprawl. The overall tone of the series, and personality of the title character, was as if the main character from "For a Few Dollars More" had been transplanted from the grimy wild west to an even grimier and wilder dark future.

Two full-color issues of "Jake Thrash" were published in 1987, then sky-rocketing printing costs forced Aircel Comics to convert their titles back to the black-and-white they had started as, the operation was acquired by Malibu Graphics... but the third chapter in the tale of "Jake Thrash" never appeared, an apparent victim of changing market conditions and business decisions. 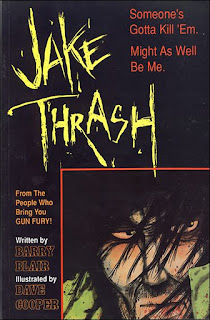 But in 1989, Malibu Graphics published a "Jake Thrash" graphic novel that collected a six-page teaser that had appeared in several of Aircel's titles prior to the debut of the aborted mini-series, the two issues that had seen print, and the lost third issue between two covers. It was a handsomely designed book that mostly did the material proud. Some of the gray-scale art is a bit muddled, but in general what had been intended to be elaborately colored pages--Aircel's color comics were amazing for what was industry standard at the time--comes across nicely. Dave Cooper's unusual line-art almost looks better this way, so, in the end, a black-and-white Jake Thrash might be been best after all.

Like is so often the case when revisiting something we loved when we were young, I found that reading "Jake Thrash" again 20+ years later, it's not quite as perfect as I remembered it, but it's still much, much better than many modern comics I've had the misfortune of flipping through in bookstores of late. Barry Blair's dialogue is clunky in many spots, and there are times when Dave Cooper's presentation of a fight scene or chase scene is a little hard to follow, but these are minor flaws in what is, generally speaking, a pretty intense reading experience. Blair and Cooper are far more effective and clear in their story-telling techniques than many modern artists and writers and it's a shame that I have to list this book under the "Forgotten Comics" heading.

I find it to be doubly a shame, because, even though I now see the imperfections in Blair and Cooper's work, the scene I remembered the clearest from the book was exactly as I recalled it, and I still consider it one of the greatest comic book moments I've ever read: 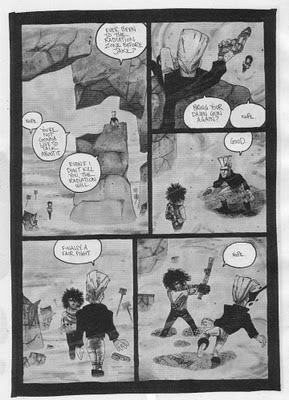 Barry Blair passed away in 2010 after spending his last few years drawing comics that can generously be described as "adult comics" or "erotica." His output declined steadily in quality from the mid-1990s on, and Cooper has left the comic book field in favor of children's book illustrations, but during the 1980s, both men produced some excellent material. I will have to revisit more of it in this forum.
Posted by Steve Miller at 12:02 AM