'The Man Who Knew Too Much'
is worth knowing

When Bob and Jill Lawrence (Banks and Best) become aware of an impending political assassination, the leader of the terror ring, Abbott (Lorre), has their daughter(Pilbeam) kidnapped. Abbott hoped the threat to the daughter would keep the couple frightened and silent until the deed was done, but he underestimates the courage and tenacity of these parents who will go to any length not only to rescue their child, but to see the terror ring destroyed. 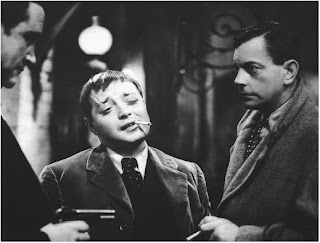 "The Man Who Knew Too Much" may not be Hitchcock's greatest film, but it is still an exciting piece of work, and the family dynamics presented are very nice, particularly between the characters of Bob and Jill Lawrence. Lorre also portrays a villain who manages to come across as charming and supremely creepy at the same time.

One thing that I noticed about this film is that the characters seemed different than what seem to be the mainstays of Hitchcock's movies... they seemed to be more apt to openly accept and embrace adventure; most of the central characters in his movies seem to be unwilling heroes at best. However, I recently learned that the script was originally supposed to be a Bulldog Drummond film, set years after he and Phillys Clavering were married. Hitchcock was unable to get the rights to those characters, so the script was redrafted to remove all references to Hugh Drummond and friends.

Faster paced than just about any other Hitchcock movie, and with more witty banter that even in "The Lady Vanishes", "The Man Who Knew Too Much" is a fine way to spend an hour and a half.