One of the greatest haunted house movies

A parapsychologist (Revill) travels to Balasco House--also known as "Hell House" and reported to be the worst haunted house in the entire world--with his wife (Hunnicutt) and two psychics (McDowell and Franklin) in order to gain indisputable, scientific evidence for the existence of ghosts and other supernatural phenomena. But the evil that dwells within the sprawling mansion never gives up its secrets easily.... 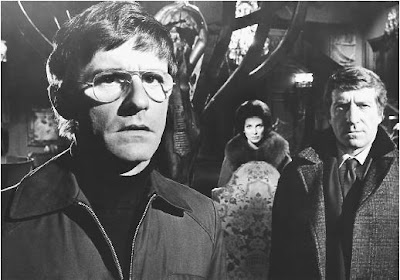 "The Legend of Hell House" is one of the greatest haunted house movies ever made. It works, first, because the director and cinematographer manage to convey the sense that the house itself is alive and a character in the movie, and, second, because of the great peformances of the stars, and, third, because it features a script so tight that not a single line of dialogue or action on the part of the characters doesn't feed into the suspense and horror of the film--horror that keeps mounting until the final twist at the movie's end.

This is a movie where everything is done right. The cinematography and lighting is supreme, the actors are all perfect in their parts--with Roddy McDowall as the reluctant psychic shining even brighter than the rest--and the pacing is perfect throughout.

I wish the producers and directors of moden horror movies (particularly ghost movies) would take a look at "Legend of Hell House". This film is far scarier than any ghost movie of recent vintage.
Posted by Steve Miller at 11:53 PM